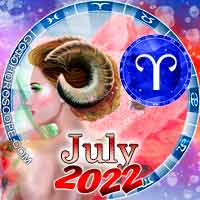 For the past few months, Aries received a substantial boost in morale. This is mainly attributed to the planet of good fortune, Jupiter, who entered your 1st house of self and identity around May. To top that up, you also had the ruler of your very sign, Mars, in that same place, giving you a boost in confidence and drive to achieve your grandest desires. Since Jupiter is also responsible for the exploration of both physical spaces and mental spaces in your chart, these months were also packed with revelatory moments about your understanding of purpose.

The reason why I'm prefacing this horoscope with all this is that Jupiter is now getting ready to start retrograding back into your 12th house. The shift from 1st to 12th sometimes can be pretty drastic. In many ways, the planet goes from being able to provide as much support as possible to no support at all. Although, if you work at a hospital prison or spend a lot of time alone, this can actually be a relatively positive shift.

Either way, July is the month to get ready to say goodbye to Jupiter's many blessings. Still, know this farewell is only temporary because Jupiter won't be retrograde forever. Eventually, he will start moving forward again, consequently returning to your 1st house, but this is more of a 2023 thing for you. With that, if you enjoyed these past two months, know that there's a lot more of that coming your way in the next year.

Even if Jupiter is getting ready for the retrograde, the official departure won't happen until October, so you have plenty of time to prepare yourself, which brings me to this month's focus: preparation.

Out of all the months in 2022, July is the strangest month by far. The month starts hot with many of the blessings still happening in your 1st house, only for it to quickly dwindle, ushering us into the most dramatic transit of the year. While the transit-only concretely occurs on the 1st of August, this month is a slow build-up towards that.

I understand that this may sound threatening, but the thing to be thankful for here is that you actually have quite a lot of time to build a safety net for yourself, and here's how you can do that.

The first real hint of what you should be paying attention to this month is the Full Moon. This one happens on the 13th of July and in your house of visibility, authority and career. While Mars, who's exalted in your 10th house, is able to provide some support, he will still be in your 2nd house of resources, a place where he doesn't necessarily thrive. To top it up, this is also the place where the aforementioned major pace-changing transit will take place, so as much as Mars will be trying his best to help, there's very little he can do. In more concrete terms, you can expect a certain level of good fortune and visibility in the workforce, though one that either doesn't last very long or comes with some side effects. Mars is in your 2nd house can point towards extra expenses. A scenario this could be illustrating is a raise at work that is immediately followed by an additional sudden bill you have to pay—knowing that it's best to avoid making big purchases this month.

The New Moon of the 28th of July paints that picture even more accurately as it's just a few days before the triple conjunction of Mars, Uranus and the North Node that many astrologers and enthusiasts have been anxiously anticipating. The good news is that the lunation itself falls in your 5th house, which is one of the most pleasant places in the chart. This is usually where we find children, joy, games and sexuality, so as much as this transit can be challenging, for you, it's more of a bittersweet situation. Knowing that Mars is interfering with your finances throughout this month and the next, it could be that the extra expenses mentioned earlier are unexpected, but they come from a place of entrepreneurship and creativity. Maybe you'll feel the urge to buy some expensive equipment for an artistic project or even a luxurious date to impress the person of your dreams. These are far from being complex purchases, but be careful not to spend money that you don't have.

July is a busy month for all zodiac signs. Aries somehow manages to stay on the better side of the wheel of fortune, though. Even if disruptions, extra expenses and a general slowing down can be expected, this is still far from a disastrous time. Just make an effort to think twice before swiping your credit card, and you'll be just fine. Good luck, Aries!