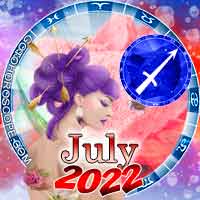 As a sign ruled by Jupiter, the best astrological practice for Sagittarius is to pay attention to whatever the king of the heavens is up to. This month, Jupiter will steadily get ready to go retrograde, which is not bad, contrary to what astrology memes would have you think.

As Jupiter slows down, it will be moving back into your 4th house of foundations, heritage and family. This is the place where the planet spent most of the year so far, so be ready to go back to whatever mood you were in at the start of the year, mainly if any major event involving your family occurred. Still, as much as Jupiter will be slowing down this month, the official revisits to 4th house topics doesn't officially happen until October, so until then, the focus should be to get ready for rewinding.

You're probably wondering why I'm even mentioning this since this official transit seems so far away. The main reason why it's essential to pay attention to this is that Jupiter, as the planet is known to gift you with opportunities, has been giving you quite the helping hand in your 5th house. This is the house of creative endeavours, fun, sexuality and children. Having such a planet getting ready to retrograde can be somewhat disheartening, almost as though you'll feel like the Universe teased you with all that's possible only to take it away from you. Now, this couldn't be farther from the truth.

Jupiter in your 5th house was never supposed to be a long-lasting transit this year. This so far has only been a preview of what 2023 has in store for you. So if you've been living your best life, know that even if you're hitting pause on it by the end of the month, the gates will be wide open once you enter the new year. And with that said, it's not like Jupiter will stop helping you out for the rest of the year. It simply still has a few things to sort out in your home sphere.

Now that we're covered on what Jupiter is doing, this is a good point to take a look at the Full Moon in your 2nd house.

The 2nd house is typically associated with value, whether monetary or otherwise. Back in the days of ancient astrology, you would even find cattle represented by the 2nd house since they used to be so valuable. So this month, you can get ready to take a deeper look at your sense of worth. Commerce is also strongly supported through this lunation since we have Mercury very close to the Sun —who's, of course, a significant player in lunation charts. The Mercury influence can be good for business dealings and sorting out contracts and loans, although the closeness to the Sun also means that Mercury is invisible. The visibility factor can symbolize that even if this might be a good time to get bills and agreements figured out with your peers, those will essentially be outside of the public eye. This can be an excellent opportunity to work on things you want to keep secret, though be wary of doing anything shady.

This Full Moon will happen on the 13th of July, so mark it down on your calendar.

Now, shade and business aside, the New Moon is really the highlight of this month. It will be happening in your 9th house on the 28th of July.

While this does set up the stage for some rather challenging global transits, Sagittarius actually gets a free pass on this one. If anything, if you have your Ascendant, Sun (if you were born in the morning) and Moon (at night) anywhere near 5 to 8 degrees of Sagittarius, this is likely to be quite an explosive opportunity for new beginnings. Though it may involve backtracking and revisiting some older ideas, this New Moon can trigger a new chapter of exploration and wonder. While this could include travel, it's more likely that you'll be returning to an old skill or talent you enjoyed when you were younger. There's even the potential for it to turn into a career change. Still, it's also important to note that the New Moon will be square Mars and opposite Saturn, the two malefic planets in traditional astrology, meaning that despite it being an exciting turn of events, Sagittarius will still have to be patient, work hard and have a long term vision if you want to fully reap the benefits of this transit.

July is a big month, especially for you, Sagittarius. Somehow you'll manage to masterfully avoid much of the chaos surrounding you with your laser focus on your vision. I'd say the world is your oyster, but you already know that!