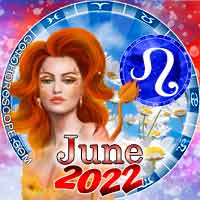 In the season leading up to the Sun moving into Leo, your planetary positions will align in a particularly positive way for you specifically. Your energy during the month of June 2022 will be particularly influenced by the positions and transits of Venus, Mercury, Mars, and the Sun. You are ruled by the Sun, so any movement around the Sun is a particularly strong influence on you during any time. However, with the start of the Sun’s Leo season being so close throughout the month of June, the influence of the Sun will be especially strong and impactful for you.

Within the first few days of June, the Moon will have some particularly important planetary transits for you. On June 3rd, the Moon in Cancer will be in a sextile to Mercury in Taurus. While the influence of the Moon is not as strong as that of the Sun on your sign, the polarity of the Moon will impact you in very specific ways. For you, the position of the Moon in a sextile to Mercury will enable you to communicate your thoughts and ideas in an incredible sense of sensitivity. You are not well known for your sensitivity by any means, but by adding a more sensitive approach to your communication style, you will be able to reach more people than ever before.

The following days will come with several important transits of the Sun. One of the more impactful planetary transits on your sign will occur on June 11th. On June 11th the Sun in Gemini will enter into a trine with Saturn in Aquarius. In particular, this trine will be rather soft in its influence. It will lead you to embrace the more casual, peaceful, and pleasurable aspects of life. For you, these planetary positions of the Sun and Saturn will facilitate a deep craving for you to have a stronger sense of self. You often feel like you’re putting up a performance to please the desires that others have for you. As a result, your true self may be hidden away. However, with the Sun and Saturn in a trine aspect, the importance of finding yourself will be at an all-time high and will subsequently become one of your main focuses for the remainder of the month.

On the 16th of the month, Venus in Taurus will trine itself in relation to Pluto in Capricorn. The influence of this particular planetary position results in rather specific outcomes. The connection between Venus and Pluto will emphasize your hidden fear of rejection and abandonment. In the most unfortunate of situations, this may bring out a manipulative and cunning side to your personality that you did not think existed. It also has the ability to further increase your need and desire for attention and obvert displays of love. By no means is this necessarily a bad thing, it is just something to be considered within your relationships. The stability in Taurus will ease the overwhelming need for attention a bit and will give you the stability to feel comfortable enough to express these needs to others. This in of itself is an incredible feat for anyone.

A couple of days later, on the 18th of the month, the Moon in Aquarius will transition itself into a sextile to Mars in Aries. The combination of the Moon and Mars coming together in a sextile like this opens you up to an increased sense of emotional hostility and the desperate need to protect and nurture those you love. You are an incredibly loyal person, and with the Moon in Aquarius, this loyalty will translate itself into wanting to protect and nurture your loved ones to the best of your ability. You always have feelings like this beneath the surface, but with the Moon being so close to Aries, these feelings will finally rise above the surface. However, be careful not to suffocate yourself or others by the intensity of these feelings.

On June 27th, the Sun in Cancer will be in a square with Jupiter in Aries. The squaring of the Sun to Jupiter will bring out an increase in personal confidence and optimism about the world around you. The past year or so has been especially challenging, so this break in difficulties opens you up to more optimism than you have had in a rather long time. During this period, positive affirmations and manifestations will be a powerful tool. This will also help you envision what your future could possibly look like. More than anything, the position of the Sun and Jupiter represents community-wide and personal potential. This is an important energy to carry over into the following months.