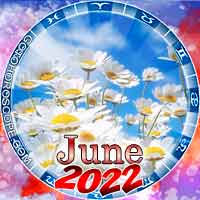 Or read general June 2022 Horoscope for a month ahead

As May comes to an end, be prepared to fully embrace all of the good and the bad that will come with June’s 2022 transits and movements. This month will have a lot of energy focused on the planetary transits of Mars, Venus, Mercury, Jupiter, and Saturn. Any movements these planets have this month will have an incredible influence over each of the zodiac signs- albeit in some different ways. The beginning of June will also have particular intensity in regard to the influence of Mars, Venus, Mercury, Jupiter, and Saturn on the daily lives of the signs.

One of the most impactful planets this month is Venus. Venus’ intense influence over the emotions, passions, sensuality, and romance of each and every sign. However, it is important to note the position of the moon and any upcoming lunar transits. June will start with the moon in Cancer. Cancer’s lunar influence will emphasize the true importance of family and home within life. Spending more time relaxing at home will be particularly satisfying. The influence of a Cancer Moon may cause some additional tension on emotions. It will not be unexpected for emotions to be a little more intense and haywire throughout June.More towards the middle of the month, specifically June 11th, Venus in Taurus will be in conjunction with Uranus, also in Taurus. During this time, Taurus tendencies and habits will become increasingly apparent. With Venus in Taurus in conjunction with Uranus in Venus will emphasize emotional independence. This will become a top priority throughout the month of June. There will be increased hesitancies around commitments and a larger focus on hiding true feelings and emotions. This planetary position will expose the natural need for feeling free. It is important for June to be filled with openness and freedom.

On the 16th of June, the Sun in Gemini will begin to square Neptune in Pisces. The planet of Neptune is ruled by Pisces, making the influence of Pisces particularly strong during this time. Daydreams will be a reoccurring event, perhaps even initiating a desire to follow unexplored lifelong passions. Empathy for others will also be brought to the forefront, however, the influence of Gemini will make solving problems for others that much better.

Once again Venus is on the move. On the 18th of June- Venus in Taurus has moved to square Saturn in Aquarius. The opposing elements of these two signs - Earth and Air respectfully - will cause a range of conflicting influences. There will be a longing for stability while fighting the urge to live in chaos. This position will ultimately emphasize responsibility and restraint until Venus or Saturn moves into another position. However, in this planetary position, fear will be an ever-increasing presence.

As January continues on, around the 20th of the month, Mercury in Gemini will move to square the Moon in Pisces. It is important to note that Gemini is the ruling planet of Mercury, and with the Sun also being in Gemini on this particular day that the Gemini influence will be hard to avoid. Communication will be a big focus during this time. With the influence of the Moon in Pisces, communication that would otherwise be healthy and open will become a little overwhelmed by emotions. Understanding the emotions of others will not be a problem this month, but communicating personal emotions will be a month-long challenge. There will also increase gossip tendencies.

Starting on the 27th of June, the planet of Mars in Aries will transition into a sextile of the planet Saturn in the sign of Aquarius. This planetary position will emphasize the need for hard work and responsibility in life. Energy will be bountiful and may seem to be inexhaustible. This is a perfect time of the month to get projects or assignments done. Organizational skills will be particularly helpful with an endeavor like that. Mars will increase the internal confidence of people, making facing challenges or solving problems a complete breeze until the end of the month.

Within the last few days of June, the planet of love - Venus will move out of Taurus into Gemini. At the same time, this is happening, Jupiter will move into Aries. These two planets will then be in a sextile position with one another. This planetary position is particularly harmonious. While relationships between Gemini and Aries can be overwhelming, the influence of Venus and Saturn will create an incredibly relaxing environment. Adaptation to new scenarios and problems will be rather easy. Entering into July and leaving June, it will be near impossible for anyone or anything to phase you in the slightest. Overall hospitality and generosity will be a huge theme during this time as well. With the strenuous months of the past year or so, it is a good sign for such a harmonious planetary transit to be anchoring the end of the month.