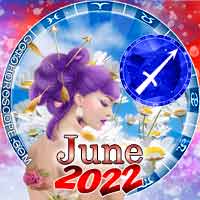 Sagittarius, you are someone that will be profoundly influenced by the upcoming planetary transitions and eventual positions throughout the month of June 2022. While the planets in general impact every single astrological sign, the effect is not always equal. Depending on which planetary position, you will be incredibly impacted by them, whether it was a good or bad influence. In particular, the planets of the Moon, Venus, Mercury, Mars, and Neptune will be sources of great influence over you this month.

During the first few days of June 2020, the Moon will have an incredible impact upon you. On the 4th of June, the Moon will be in Leo while in trine with Mars in Aries. The trine between the Moon and Mars will be an especially harmonious aspect. This will bring out the more constructive and practical aspect of your personality. This will help you solve problems both in and outside of the home with relative ease. In comparison to your more typical state- you will feel much more inclined to have an aura of goodwill and will be completely prepared to compromise. This doesn’t necessarily extend to every scenario possible, but rather is an overall trend. The positioning of the Moon and Aries will also open up your forms of communication. You may come across as a bit more serious than usual, but this impression will be fleeting.

Further into the month of June, around the 11th of the month, Venus in Taurus will be in conjunction with Uranus in Taurus. The conjunction between Venus and Uranus will facilitate additional emotional independence for you. This will become a high priority need for you, especially throughout the remainder of the month of June. You will feel the need to avoid commitments in almost every aspect of your life. You will also feel inclined to hide your true feelings. If there is a threat to your sense of independence under this planetary position, your immediate reaction will be to coldly distance yourself. This may cause you to leave a relationship or friendship rather abruptly. Without this sense of independence and freedom, you will not be able to have a successful relationship.

On the 16th of June, the Sun in Gemini will be in a trine with Saturn in Aries. The planetary positions of both the Sun and Saturn in this trine will provide you with a peaceful and harmonious approach to life. This will allow you to be able to work hard and diligently. You will feel an additional urge to take on additional responsibilities, especially within your workplace. However, the position of Saturn in relation to the Sun will make it easier for you to be unnecessarily hard on yourself. While you do have the occasional urge to be harsher on yourself than necessary, during this time period, your self-scrutiny will be at an all-time high.

A couple of days later, on the 18th of June to be precise, Mars in Aries will transition into a sextile of the Moon in Aquarius. Similar to planetary placements and transits from earlier in the month, you will continue to be influenced by the planets to remain rooted in logic. The harmonious aspect of the sextile of the Moon and Mars will emphasize the helpful and practical aspects of your personality. This is largely due to the strong influence of Mars in Aries on your astrological chart this month. Mars will continue to make you a bit more serious than usual, but most notably, it will make your anger a heavier sensation for others to behold.

On the 20th of June, Venus in Taurus will find itself in a harmonious trine with the planet of Pluto in Capricorn. Venus and Pluto’s interactions and position with one another will give you an increased sense of deep feelings and connection to relationships. If you are in a committed relationship, this will only serve to form a deep and loving bond between the pair of you two. However, if you are single, expecting a similar depth of feeling from anyone you are seeing will be a bit much to expect them to reciprocate. If you expect this from someone you don’t already have a strong connection with, this will serve as a reoccurring source of frustration for you. However, if you are able to remain patient, they may be able to return these feelings with the same level of vigor.

During the last days of June- on the 29th and the 30th mainly- the Sun will have increased importance for your chart. The Sun in Cancer will become a square with Jupiter in Aries. The aspect between the Sun and Jupiter will encourage you to be more idealistic and support movements you usually wouldn’t You will feel a greater willingness to make sacrifices in order to properly support these movements than you ever have before. You won’t have a lot of fear around doing so- your optimism will overwhelm any sense of hesitancy you may have.