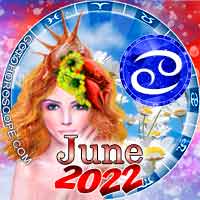 The second half of June will be well into the Sun’s season of Cancer. This, of course, adds an increased level of intensity to all of your planetary positions and movements this month. The effect of the planets will be more direct than it will be on other signs in the zodiac. The planets of Venus, Mars, and Mercury will be incredibly influential on your sign during the month of June 2022. These planets will be important in nearly all of your major planetary transits this month. Make special note of any planetary position or transit that involves any of Venus, Mars, and Mercury in June. It will be especially important for you to be aware of this.

On the third of the month, Uranus in Taurus will move itself into a sextile position with the Moon in Cancer. This is an incredibly harmonious planetary position for both of these planets. It will bring along a very intense feeling of calmness and tranquility within your life, particularly with your family relationships. The position of Uranus in a sextile with the Moon indicates an increasingly intense need for emotional freedom and independence, specifically on a day-to-day basis. Grand gestures of independence will not satisfy this need instead a more intentional focus on smaller, daily acts of freedom will be more impactful for your life going forward. With the Moon being in Cancer in this planetary position will intensify your overall emotional state, making the need for your emotions to be validated- on your own terms- intensely important to you during this time.

Immediately after June 3rd, an incredibly important planetary transit will affect the way in which the rest of June will unfurl for you. On June 4th, Mercury in Taurus will move into an intense square with Saturn in Aquarius. On the heels of this planetary transit, Mercury has just exited its’ retrograde cycle. In fact, June 4th is the very first day of Mercury where is moving out of retrograde into a direct position in the sky to the other planets. Mercury retrograde signified a lot of personal changes for you, so leaving Mercury retrograde you will be able to finally slow down and take in these changes. This is the perfect time for you to understand how these newfound changes have impacted you personally and how these life changes may continue to affect you long into the future.

The position of Mercury itself in a square with Saturn will provide you with a calm, serious rationale. You may feel more serious than you typically are. You will not be afraid to have fearless thoughts, but you will take extra precautions when expressing these thoughts to others. You will take extra time and thought into everything you say and do during this time. This is a skill that will be particularly helpful in dealing with some of the planetary transits later in the month.

A few days after Mercury ends its’ retrograde period, on June 11th, Mercury in Taurus will find itself in a trine with Pluto in Capricorn. This is a major soft aspect- it is a rather easy aspect to have and is a truly beneficial planetary contact to have. The trine of Mercury to Pluto will assist you in coming to accept things outside of your control and your personal shortcomings. You will feel particularly inclined to explore your intellectual potential and curiosity. In the past, you may have struggled to accept your limitations in gaining knowledge, but this trine will provide you with additional clarity around this. As frustrating as it may be for you, a trine between Mercury and Pluto will allow you to come to terms with the fact that you simply cannot know everything. However, this will not stop you from learning as much as you possibly can.

On June 20th, Venus in Taurus will find its way into a sextile with Neptune in Pisces. A sextile between Venus and Neptune represents the opportunity and potential for newfound romantic love will blossom. During this planetary position and transit, you will find yourself particularly drawn to beauty and peace. There isn’t a singular way for you to appreciate all of the beauty that the world has to offer. However, the combination of Venus in Taurus and Neptune in Pisces will heighten your focus on romance and love. Romantic fantasies will flourish during this time.

As June slowly comes to an end, the Sun in Cancer will enter into a square with Jupiter in Aries. This square will heighten your optimism and confidence about the world. The influence of Aries in particular will embolden you to act with swift confidence in all of your actions. You are not usually the most confident person in the world, but the positioning of the Sun and Jupiter will be a positive change in this regard. However, it will take effort on your behalf to keep this confidence going after the Sun and Jupiter move out of this square.