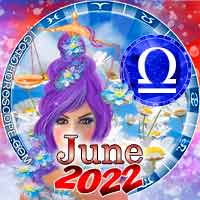 As the sign of the scales, you have a lifelong struggle of achieving a true sense of balance within your life. To others, you may appear as someone who is able to balance everything that life throws your way, but even maintaining this façade requires immense effort on your part. Even with your continuous and conscious effort to maintain this, you can very easily be swayed into extremes. Throughout the month of June 2022, the difficulty you have in maintaining balance in your life will continue to be challenged. Particularly, the placements of Mercury, Mars, Venus, and Jupiter will create additional difficulties in your pursuit of achieving a well-balanced life.

Starting very early in the month, you and your fellow Libras will be pushed by the influence of the Moon and Mercury. On June 3rd, the Moon in Cancer will enter into a sextile of Mercury in Taurus. The position of the Moon and Mercury to one another creates an atmosphere of almost complete accommodation. It’s not that the world is going to suddenly open up and accommodate your needs and wants out of life, but rather you are going to be much more accommodating to those around you. Typically, this is a rather good thing. However, with your sense of life balance already being off-kilter, you will become far too accommodating to those in your life. You will try to be so accommodating to others that it will come as a severe detriment to your own needs. Your thoughts, feelings, and opinions will drop by the wayside in favor of what others think.

The very next day, June 4th, Mars in Aries will move itself in a position of conjunction to Jupiter in Aries. The presence of two planets with strong Aries energy will double the presence and influence of Aries onto your chart. There are a lot of benefits and good things that come along with this planetary placement, however, you will be unfortunate enough to receive more negative aspects of this planetary position rather than the benefits. The major problem you will run into with a Mars and Jupiter conjunction is the tendency to oversell your own opinions and thoughts. Of course, this is a very helpful skill in a lot of varying scenarios, but it is not applicable to every aspect of your life. Be careful not to insert your desire to express your opinions in scenarios where it would do more harm than good.

Later on in the month, around June 11th, the planet of Venus in Taurus will transition into a conjunction position to Uranus in Taurus. Once again, there is a heavy Taurus presence on your chart throughout the month of June. The challenge that you face with this planetary position is focused on your need for meaningful love and relationship connections with your separate need for personal freedom, independence, and space. The degrees in which you want both of these very different things can complicate your romantic life throughout the remainder of this planetary transit. The upside to a conjunction between Venus and Uranus is that it will illuminate your inner charm and charisma. Do not be afraid to use this to your advantage.

About a week later, on June 16th, the planet of Mercury in Gemini moves to sextile the planet of Jupiter in Aries. The very best part of the planetary positions of Mercury and Jupiter in a sextile with each other is the balanced judgement that comes along with it. You will have better clarity and insight to see the true overview of any situation that comes your way. However, this may also come along with a twinge of arrogance that is unattractive to most people.

On the 18th of June 2022, the Sun in Gemini will transition into a square against Neptune in Pisces. A Sun and Neptune square brings out your highest sense of love, kindness, and compassion for your community. You have a rare ability to understand the plights of others on an immensely deep level that few others can scarcely match. Throughout your life, you have been lost and adrift many times, so when others encounter this specific problem, you know exactly what they are going through. This planetary square brings out some of your very best traits.

On June 20th, Venus in Taurus will trine Pluto in Capricorn. This planetary position will intensify your romantic feelings on a multitude of different fronts. The most notable emotional intensity for you during this time will be jealousy. It is more than natural for people to feel the occasional twinge of jealousy. However, with Venus in trine to Pluto, your feelings of jealousy will be incredibly intensified. This mostly comes from a place of insecurity, but you will be overtly jealous when the object of your affections moves their attention elsewhere. Even if it is an innocent action, it will be easy for jealousy to quickly overwhelm you. However, if you are cognizant of this tendency, it is something you are more than equipped to handle.