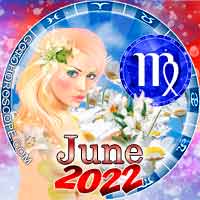 Virgos are the mutable Earth sign of the zodiac cycle. This gives you an inherent balance of stability and flexibility that is near impossible for other astrological signs to achieve. Your inner balance of stability and flexibility will be a large factor in regards to how the planetary movements and transitions this month will ultimately affect you. The most powerful and influential planets for you this month will specifically be Venus, Mars, Mercury, and Saturn. The positions and movements of each and every of these planets will have a direct and strong impact on your daily life throughout the month of June 2022.

Starting in the very beginning of the month, the third to be exact, Mars in Aries will be in conjunction with Jupiter in Aries. The conjunction of Mars and Jupiter both in Aries will really emphasize traditional Aries traits during this planetary transition. Most notably, Aries like passion and heat will be present in your daily activities. Most directly, the conjunction of Mars and Jupiter will lead you to actively fight for what you believe in. Your passion for standing up for your beliefs will be at an all-time high. These planets' positions will make you act with uttermost confidence within your activist work.

The day after June 3rd Mercury in Taurus will position itself in a square to Saturn in Aquarius. Similar to the majority of planetary placements involving Saturn, there are two distinct and hard aspects with the other planet. The square between Mercury and Saturn will give rise to two very different forms of feelings and behavior- with a sliding gamut of possible combinations. This particular square will emphasize the importance of thorough, serious, and responsible thinking. At the same time, there will be an avoidance of mental fear. You will feel the need to think long before you speak, but this inhibits your ability to openly express your true feelings.

Also on this same day- June 4th- Saturn in Aquarius will enter into a new period of retrograde. While retrograde is a time of intense change, these changes will come along with an intense period of personal growth. The retrograde of Saturn is the ideal time to reflect on your past behavior and work to understand how it may affect your karmic future. Also, make sure to take time to honor yourself and avoid the pressure that others may present. However, do not feel rushed to enter into these actions. Saturn in Aquarius’ retrograde period will go on for months- only leaving the retrograde period at the very end of October. Saturn in retrograde will be a touchstone for your behavior until that time.

Later on, in the month of June 2022, Venus will make some important planetary transits. Specifically, on June 16th, Venus in Taurus will enter into a trine position with Pluto in Capricorn. This is a rather pleasant and harmonious aspect that allows you to experience your relationships on a truly deep and intimate level. However, during this time you will expect this same level of intimacy from your partner as well. This is a lot to put onto another person- they may not be able to reciprocate your feelings with the same level of intensity. This difference in intensity of feelings can easily give way to a plethora of different relationship problems. Along with this, there may be a strong dramatic element to a relationship with this level of intensity. Whether it is happiness, love, or angry fights- all of these emotions will come along with an obvious dramatic flair.

Following this transit, on the 20th of the month, the Sun in Gemini will trine itself with the planet of Saturn in Aquarius. The position of the Sun in regard to the position of Saturn will urge you to reject the traditional norms of those who are in a leadership position and yield power and authority. To say the very least, you have been disappointed by the actions of authority figures within recent memory. This level of feeling may allow you to consider the pros and cons of entering into a position of leadership yourself. This could be channeled in a plethora of different ways. However, you may run into some difficulties in executing this desire.

Finally, within the last couple of days of June, Moon in Gemini will enter into a sextile to Mars in Aries. The position of Moon to Mars on the 28th will open you up to be honest and direct about expressing your thoughts, feelings, and emotions. There will be a strong need for you to make your feelings clear to those around you. But along with this, you will have equal vigor in your hatred of others being emotionally ambiguous. You have an expectation of others to communicate their emotions just as clearly as you do. This will carry over into the early days of July as well.