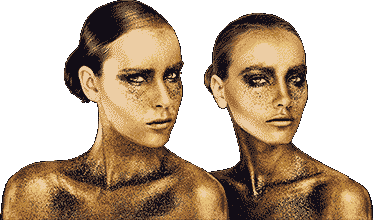 Name: Anne Frank
Birth Date: June 12, 1929
Death Date: March, 1945
Place of Birth: Frankfurt, Germany
Place of Death: Belsen, Germany
Nationality: German
Gender: Female
Occupations: diarist, author
One of them most notable writings of the Holocaust, Anne Frank's The Diary of a Young Girl has been the basis for films, plays and research papers. Her diary detailed her experiences hiding during the German occupation of Amsterdam during WWII. Anne lived in concealed rooms at her father's workplace for two years until they were betrayed and forced into concentration camps. Anne and her sister were relocated to the Bergen-Belsen concentration camp where in March of 1945 they died of typhus. Otto Frank, Anne's father, was given Anne' diary and he had it published in 1947. Today, Anne Frank is known as the symbol of the holocaust and a representative of persecution.

Name: Donald John Trump
Birth Date: 1946
Place of Birth: New York, New York, United States
Nationality: American
Occupations: businessman, real estate developer
Chairman and president of The Trump Organization and Trump Entertainment Resorts. He is extravagant and outspoken and stars on the reality show, The Apprentice. Trump is a real estate entrepreneur who got his start through his Father's Company Elizabeth Trump & Son. He has expressed interest in running for the President of the United States and is highly political. Trump owns the Trump Tower in New York City, the Miss Universe Organization, and the Taj Mahal in Atlantic City. He is referred to as The Donald. Trump has been the subject of multiple lawsuits, bankruptcy proceedings and divorce procedures. He has a star on the Hollywood Walk of Fame and is often characterized by his unique hairstyle and gruff manner.

Name: Judy Garland
Birth Date: June 10, 1922
Death Date: June 21, 1969
Place of Birth: Grand Rapids, Minnesota, US
Place of Death: London, England
Nationality: American
Occupations: actress, singer
Age at Death: 47
Cause of Death: Drug overdose
Once described as the greatest entertainer who ever lived Judy Garland was a singer, actress and vaudevillian. She received a Juvenile Academy Award, Golden Globe Award, Grammy Awards and a Tony Award. Garland is most identified as Dorothy in The Wizard of Oz. Garland won critical acclaim for her acting in A Star is Born and Judgment at Nuremberg. She is a recipient of the Cecil B. DeMille Award for lifetime achievements in the film industry. Her trademark song Over the Rainbow is the number one movie song in the American Film Institute's 100 Years .100 songs list. She is also remembered for singing The Trolley Song, The Man that Got Away, and Get Happy. She has been honored on U.S. postage stamps as well as on the Hollywood Walk of Fame.

Name: Marilyn Monroe
Variant Name: Norma Jean Baker
Birth Date: June 1, 1926
Death Date: August 5, 1962
Place of Birth: Los Angeles, California, US
Place of Death: Los Angeles, California, US
Nationality: American
Occupations: actress
Age at Death: 36
Cause of Death: Drug overdose
One of America's sex symbols, actresses, singer and model Marilyn Monroe is known for her commercially successful motion pictures, platinum hair, and cutesy attitude. She was the first Playmate of the Month in 1953 and on the cover of Life magazine in 1952. Monroe starred in Clash by Night, We're Not Married!, Monkey Business, and as a femme fatale in Niagara. She also starred in Diamonds are a Girl's Best Friend and her trademark film Gentlemen Prefer Blondes. Her iconic image, skirt blowing in the wind, came from The Seven Year Itch. Monroe was acclaimed for her performance in Some Like it Hot. Her last completed film was The Misfits in 1961. The last person Monroe called before her death from a drug overdose was President John Kennedy.

Name: Paul McCartney
Born: 18/06/1942
BirthPlace: Liverpool, England
Sir James Paul McCartney is a multi-instrumentalist, composer, singer and songwriter. He performed with the Beatles, one of the most popular acts in rock music. He wrote songs with John Lennon and their composition Yesterday is the most widely performed music piece in the world. McCartney formed Wings after the Beatles broke up and has also pursued a successful solo career. McCartney has 50 gold discs and sold over 100 million albums. McCartney was nominated to the Rock and Roll Hall of Fame in 1999 and was knighted by Queen Elizabeth in 1997. He also wrote or co-wrote over 32 songs listed at number one on the billboard Hot 100s. McCartney participates in associations for animal rights, against seal hunting, landmines, poverty and is active in music education and vegetarianism.

Arthur Stanley Jefferson (comic actor)
Born: 6/16/1890
Birthplace: Ulverston, England
Died: 2/23/1965
Cause of Death: Heart attack
Best known as Laurel of the Laurel and Hardy duo, Jefferson began his career in a British music hall. His bowler hat, comic gravity and nonsensical understatement became his symbols. His film The Music Box in 1932 won an Academy Award. Jefferson has a star on the Hollywood Walk of Fame and was awarded a Lifetime Achievement Academy Award in 1961. He starred with Hardy in Slipping Wives, Duck Soup in 1927 and With Love and Hisses in 1927. They also acted in The Battle of the Century, Should Married Men Go Home?, Two Tars and Big Business. Their first talking film was Unaccustomed as We Are in 1929. They were the comic relief in The Rogue Song in 1931. In the 1940s Laurel and Hardy starred in The Bullfighters and Jitterbugs.

Name: Vincent Price
Born: 27/05/1911
Birth Place: St. Louis, USA
Died: 25/10/1993
Age at Death: 82
Cause of Death: Cancer
Known for his distinctive voice and popularity in horror films, Price began his theater career in Victoria Regina (1936). He starred in 1938 with Service de Luxe and in the film Laura in 1944. He played Joseph Smith in Brigham Young in 1950. He was a priest in The Keys of the Kingdom in 1944. His horror film career began with Tower of London and The Invisible Man. His career included a comic role in Champagne for Caesar and he was a crime-fighter on radio in The Saint. His horror films included The Mad Magician in 1954, The Fly in 1958 and the House on Haunted Hill in 1959. He was also in The Ten Commandments and he played on television in The Rebel and God's Healing. His last film was Edward Scissorhands in 1990. Price was a gourmet cook and art collector plus he hosted a TV show, Cooking Pricewise.

Name: John Wayne
Variant Name: Marion Mitchell Morrison
Birth Date: May 26, 1907
Death Date: June 11, 1979
Place of Birth: Winterset, Iowa, United States
Place of Death: Los Angeles, California, United States
Nationality: American
Occupations: actor
Age at Death: 72
Cause of Death: Cancer
For over three decades Wayne personified rugged masculinity and was a top box office draw. His first major film was The Big Trail in 1930 and in 1939 Stagecoach made him a star. He starred in 142 pictures and is typically cast in Westerns. His films also include The Quiet Man in 1952, The Searchers in 1956, Rio Bravo in 1959 and in The Man Who Shot Liberty Valance in 1962. True Grit won Wayne an Oscar in 1969 and his final performance was in The Shootist in 1976. Wayne directed The Alamo and The Green Berets in 1968. In 1974 he played McQ in a crime drama. He was awarded the Congressional Gold Medal in 1979 and posthumously awarded the Presidential Medal of Freedom in 1980. He has an airport named after him in California and will always be an American icon.