Who is Mrs. Clinton? Whom is she astrologically speaking

Not only is Hillary ClintonвЂ™s sun (her spirit) in the sign of Scorpio, so is her rising sign (body/ego) along with Mercury and Venus, giving her, in astrological parlance, a first house stelluim. Hillary Clinton is a person with an unusual amount of energy focused on her intense Scorpionic persona. But Scorpios are hard to know and generally have an opaque quality to them. The reason why people donвЂ™t flock to her as a politician is because sheвЂ™s incredibly difficult see through. However, in close quarters with trusted colleagues, she has a dark, intense charm through a very afflicted first house Venus. (In detriment, square Pluto, loose trine the Moon). This difficult Venus could also mean she has the capacity to be highly obsessive or jealous.

Being a double Scorpio (sun and rising sign) she exaggerates the two well known Scorpio tendencies to privacy and secrecy. But what is this strong personality in service to? We find this by looking at the connection between her 1st house and the ruler of the first house, in this case, Mars. The quality of that relationship will be the key to how she unfolds as a person. 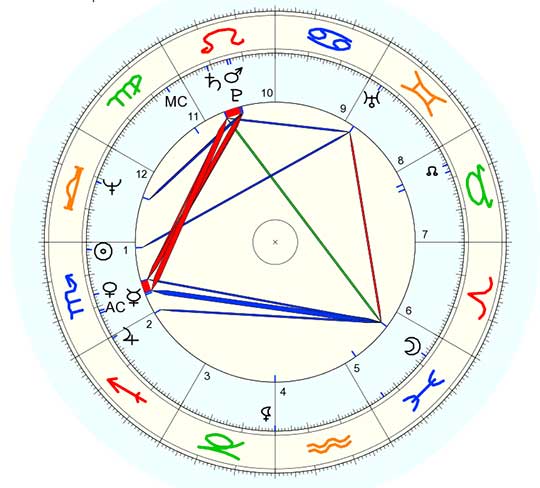 Hillary Clinton has Mars in the 10th house (the house of the world and career) in the sign of Leo. This is a strong, hot Mars. While Mars is better suited to being below the horizon, in her case, itвЂ™s at the top of the sky, the highest planet in her chart, in the fiery sign of Leo and somewhat aggressive. A key element in her chart is the mutual reception between the Sun and Mars. The Sun rules Leo, and Mars rules Scorpio, so itвЂ™s as if Mars and the Sun are guests in each others houses, creating a special and powerful connection between her ego self and her career and public life. ItвЂ™s very difficult to know where the public person ends and the private one begins. She is in many ways, ideally suited for a a prominent public life. On top of that, the planet Pluto is conjunct (next too) her Mars in the 10th house, giving her a supercharged ambition intimately related to her persona.

Leo is the most masculine of signs, a fire sign, while Scorpio is a feminine water sign. Hence, the dichotomy between the masculine public Clinton, and the private feminine one.

ItвЂ™s hard to imagine a more ambitious person. She has a poorly placed Saturn also in the 10th house, in Leo. Saturn in Leo, in astrological terms, is in detriment, which means itвЂ™s in a sign in which itвЂ™s weakened, uncomfortable and irritable. Saturn is a malefic planet and afflicted in her chart at a hard aspect to her Mercury in the first house giving her speech and communication style a somewhat stilted, heavy quality, as if she felt she were constantly being judged on what she said.

The focus in her chart is clearly on herself and her career, with an especially intense energy. ItвЂ™s very difficult to imagine a person with this chart not being prominent in their chosen career path. However, in spite of ClintonвЂ™s success in politics, following her own political ambition was never her destiny. Her North Node, or life path, is in the 7th house, which points her toward serving someone elseвЂ™s ambitions, not her own. Marriage for her is extremely important, but probably never easy, as she has a tendency to fall back on being a loner, but thatвЂ™s not her higher self. Her true path is serving someone else and using that incredible Scorpionic power and professional intensity to promote the other.

If she had remained behind the scenes, she would not only have been more effective, she would have found her true power. But Clinton has fallen back on her Achilles heel, self promotion, a path not suited for her personal development. Her chart shows that the ego serves the career, and the career the ego, with an exceptional amount of intensity, power, and even ruthlessness. She is a very powerful person, but by focusing all this power on her self instead of allowing it to serve someone else, she has missed her true calling. There is no doubt that without her, Bill Clinton would not have amounted to much, but her focusing that energy on self-promotion could backfire on her as her 10th house has an ominous, warlike flavor to it.

She is intense, very loyal, hard to get to know and extremely suspicious. A deep thinker, there is nothing frivolous about her. On the other hand, her 5th house moon in Pisces indicates Hillary is someone who likes to have a good time and enjoys parties, physical pleasures and games in a a laid back, progressive, even spiritual way. Only those who she is sure are loyal to her ever get to see this side of her, but when she lets her hair down, sheвЂ™s a lot of fun. Curiously, Donald Trump also has a 5th house moon, but in Sagittarius. As strange as it may seem, they would enjoy each others company at a party.

Hillary has always been fortunate with money, having natal Jupiter in the 2nd house in a sign it rules, Sagittarius, and in the fall of 2017, transiting Jupiter will enter her very crowded first house, making the subsequent year quite fortunate for her. If she does win the election, her second year in office will be a big improvement over the first.

This is a person destined for power, and lots of it, but she is making a mistake using that power to promote herself. Nonetheless, beginning on her birthday on October 24 of this year, by profection (and ancient astrological technique), the Moon will be ruling her chart from the 9th house (higher learning, foreign travel) from the the sign of Cancer. HillaryвЂ™s Moon is quite strong, under the horizon, in the feminine water sign of Pisces, waxing Gibbous at that time of her birth.

According to Firdaria, another ancient technique, by far the most powerful planet in her chart, Mars, has been the key planet for her since 2010. Astrologically speaking, Hillary Clinton appears to be in good shape to win this election.

Comments: Who is Mrs. Clinton?