Who is Mr.Trump? Astrological chart of Donald Trump.

There are three key factors that establish a persons identity in astrology вЂ“ the sun, the moon, and the rising sign. The sun is the spirit of the person, the moon the soul, and the rising sign the body/ego. Time has a quality- the dead of winter feels completely different than the dog days of summer, and for astrology, the person born in the dead of winter will have a much different spiritual core than one born in the heat and abundance of August.

Trump was born on June 14, in the sign of Gemini, just as spring was rolling into summer. GeminiвЂ™s are changeable, mutable in astrology parlance, and can change on dime what they think, believe or who they are friends with. Gemini is an air sign, more comfortable with ideas than emotions, good communicators if not deep thinkers. Trump is the quintessential Gemini, quick to opine, less to quick to study or go deep into the facts. But not all GeminiвЂ™s are alike, depending on the house placement. TrumpвЂ™s sun is in the middle of the 11th house, the house of groups, organizations, and the community. For Trump, being in a group is crucial- he is not one to be alone. Unlike other Geminis, Trump is no writer or journalist, this man was born for crowds. 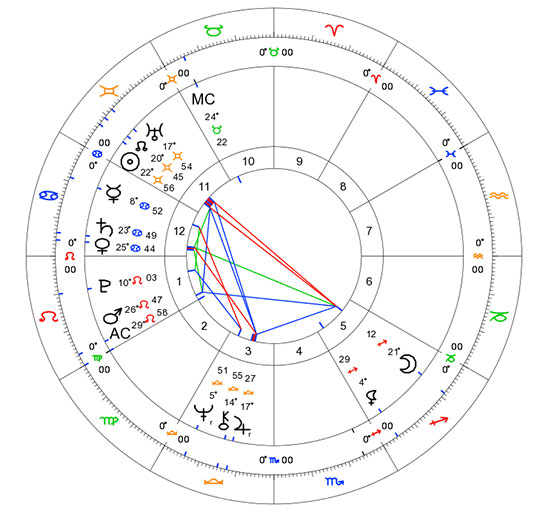 Two other key elements in his 11th house are his North Node, which can be thought of as his life path and the planet Uranus which is in close proximity to his sun. Having his north node close to his sun, in the same 11th house as his sun, clearly demonstrates that Trump is a man whose destiny lies in the collective, not the personal. Donald Trump is not someone to spend an evening alone reading or watching a documentary. He needs the crowd almost as much as they need him and every-time he speaks, he feels himself connecting to his higher self. The Uranus placement close to his sun and the North Node gives him a quirky, unorthodox, explosive nature which is more than evident in his public appearances and Twitter posts.

While Trump loves the limelight, he also loves a good time. His moon is in the 5th house, the house of fun, sex, games and children, in the sign of Sagittarius. The moon is where the heart is so itвЂ™s no wonder he is attracted to foreign ladies, as Sagittarius is the sign of foreign travel. This a a man who really loves to compete, to party and just plain have fun. When we look at the moon, we also look at the phase of the moon when a person was born, and itвЂ™s no surprise that Trump was born on a full moon, almost exact. He was born for the limelight, to be center stage, and he certainly has taken advantage of it.

Only adding to his need for notoriety, TrumpвЂ™s rising sign, or ascendant, is in Leo, the home of the sun and all things royal and egotistical. Trump is someone who canвЂ™t get enough attention. The rising sign tells us where the sun was rising at the moment a person was born, itвЂ™s their outward self, their body, their persona and is represented by the first house. Trump is not only a Leo rising, but he has the intense planet of Pluto in his first house along with the energetic and combative Mars. This is a man with exceptional energy and an intense, obsessive personality.

As for transits, where the planets are now, he has both transiting Pluto and Mars in his sixth house which is troublesome health-wise. While the focus has been on HillaryвЂ™s health, it wouldnвЂ™t be surprising to see Trump have some problems along these lines before the end of the year. Trump was born under a full moon which means that at the very end of the 2016 and the beginning of 2017, transiting Saturn will simultaneously conjunct his natal moon and oppose his natal sun, both of which are difficult aspects that will weigh him down like a bucket of lead. Could this be a harbinger of his first weeks in office and the overwhelming weight of the presidency? January of 2017 looks like a difficult month for Donald Trump.

As for transits, where the planets are now, he has both transiting Pluto and Mars in his sixth house which is troublesome health-wise. While the focus has been on HillaryвЂ™s health, it wouldnвЂ™t be surprising to see Trump have some problems along these lines before the end of the year.

Trump is almost pathologically feared by the mainstream and they are right do be scared. There is no making a deal with Trump, no buying him off. He can change his mind at any moment and will play to the populism that has elevated him to unimaginable heights, all of which doesnвЂ™t bode well for powers that be. He wants to be president because he needs, desperately, the attention and the limelight.

Alexis de Tocqueville wrote, вЂњI do not know if the people of the United States would vote for superior men if they ran for office, but there can be no doubt that such men do not run.вЂќ Trump has no business running for president and he is probably well aware of this, but as a Gemini with Leo rising, he doesnвЂ™t really care. Whatever happens, it will be a great ride for him and, unfortunately, the alternative is equally troubling.