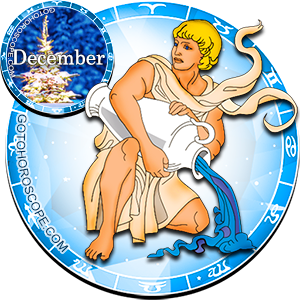 Aquarius, the zodiac House in which the energy of the Air element is dissipating, will receive a very strong "celestial leader" in December 2014 - Mars. The red planet is also the body responsible for the "fall" of the House of Aquarius, meaning that most likely his multidirectional energies will compensate themselves and you should not await trouble on his behalf. Mercury, the planet-exalt of Aquarius, will however leave for the dark side, meaning that he will end his flow of life energy and replace it with active negative emanations. The Aquarius would not be able to avoid serious problems, if not for the Sun, usually responsible for its "expulsion", also changing the direction of its energetic flows. However, due to it being a part of one of the strongest interstellar combinations, the irreplaceable king of the sky will turn into a true ally of Aquarius in his fight with Mercury. While the celestial trader will be stronger, most of his energy will be blocked. At the same time, Saturn - the planet-ruler of the House of Aquarius, will maintain the status quo and will try to not only stabilize the environment, but also help his earthly protege in the especially problematic directions.

The sphere of entrepreneurship and business will be quite successful for the Aquarius in December 2014. Perhaps you should not yearn for gold mountains, but collecting the cream will be possible in many situations, do not worry. Your competitors will bite their tongues when you will be able to receive their best clients! Do not think that everything will happen by itself. During the first days of the first ten-day period, activate your work on technically reinforcing the main directions. Then slowly move to revising human resources. Be ruthless, but fair. Yes, maintaining that thin line will not be easy, but if you will be capable of doing it (and you have all chances for it), then on the dawn of the second ten-day period you will be able to reach your desired goal. Your strategies will work as much as possible and a significant increase in profits will be just the beginning. Just the continuation will await you in the next year, so it is important not to fail the start now. Do not worry that some strings will fall out of your hands. Be attentive and then you can turn any mistake to play for your hand. At a minimum, you will be able to neutralize the potential harm. The main thing is for you to maintain your course and do not bend under the strong ones of this world.

The love front will bring you joy in December 2014 with sudden events. This statement is especially relevant to those who are preparing to meet the New Years alone. If you will not be "slow", then the first night of 2015 may not seem so cold for you. If you see something curious, do not be afraid of approaching closer and paying better attention. Do not be shy to attain new acquaintances, even if it seems that reaching your foal is impossible. You will know what will grow from a seed of a wish only if you plant it and let it grow. With fear in your heart, not only will you not accomplish anything, you will also not be able to find the right soil. So let go of your doubts and step towards new adventures. Your close ones will be fully on your side right now. Even if some of your friends do not understand your aspirations, do not worry, this is quick jealousy playing with their feelings. You are on a right path, which is the most important thing. Your emotions are your first and main light that should guide your way. Advice from others is just a slight current, which is far from always going the right way. Be open but careful. You are stronger than circumstances, remember that.

I wish Only for the truth