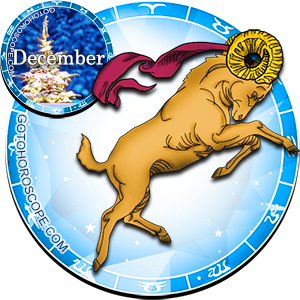 The zodiac House of Aries will have true mastery in avoiding all of the most significant problems brought on by the celestial bodies with an actively negative aura in December 2014. Nevertheless, some nuances will remain, and the stars actively recommend for the Aries to pay special attention to this. Otherwise, it is quite likely that such problems will appear that the Aries cannot even dream of. First, you should not forget about Saturn for a second, a planet responsible for the "fall" of the House of Aries. The ruler of time will definitely help the Aries to make the same mistakes the second and even the third time. In terms of the powerful exhales of negative energy, Saturn may be joined by the Black Moon, the planet-antagonist of the Moon, a planet-exalt of Aries. By the way, a true battle will emerge here, the result of which will depend on the Aries themselves. At the same time, Mars - the planet-ruler of the House of Aries, will try to protect the work direction from negative circumstances as a planet-ruler of this House. Venus, usually responsible for the "expulsion" of Aries, will change the direction of its energy and will aid it in the love front.

As a result, the sphere of business and entrepreneurship is unlikely to bring tangible results for the Aries in December 2014. However, no significant falls are foreseen as well. In other words, it will be precisely that time of summing up results that we are used to mention when thinking about the end of the year. You can truly sum up your experience and realize what you have done wrong and what your best effort was. Understanding and rethinking your past is the base for a progressive future. Use it. In December, do not aim for the stars, it is better to conclude what you have already started and have. This way, you will not only minimize potential negativity, but also will receive more bonuses. Which bonuses we are talking about is something you will have to realize when the right time comes. Meanwhile, from the dawn of the first ten-day period until the middle of the second, you should just walk your usual path and try to achieve your already existing goals. Be softer with colleagues, even if they are not too hardworking right now. A positive and an empathetic involvement are much more efficient than any direct push. Especially if you are a leader. If you are a common employee, then do not rush with initiatives as they no longer have space in the passing year. It is better to save our energy for the upcoming one.

In terms of personal relationships, everything will be slightly different. You will have to apply yourself as much as you can to reach your coveted mission. This mission may reach as high as you want, that will not be a problem right now. Remember that Venus is on your side, which means that sincere and tender feelings will be able to overcome any barrier, no matter the reason for that barrier's existence. We should not forget about Saturn either. Protect your back, do not leave ambiguities - especially in your relationships with your lover. Do not give her a reason for jealousy under any pretense, otherwise you will not be able to avoid a scandal. Also, try not to argue with your friends about some nonsense. If something, then give in and soon people will give in to you. Reaching harmony in relationships is something that you should be aiming for with all your energy. Do not stop for a minute and even among the family circle with the most positive of circumstances pay special attention to what may go wrong. This sharpened attention and efficiency will allow you to solve any problem even when they are just born. You can currently make anyone happy, do not worry.