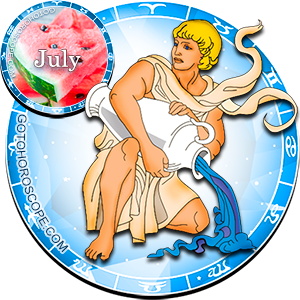 The House of Aquarius in July 2014 may count on the powerful and well-rounded support on behalf of the Solar System's celestial bodies. While Saturn, the planet-ruler of this House, will deprive the Aquarius of its help during the current period, there are many planets remaining on the celestial band that will help the people born under this sign. For example, the energy of Mercury, the planet-exalt of the Aquarius, will most likely do more than just help the representatives of this sign in the area of entrepreneurship. Mercury will attract the Sun to its side, usually responsible for the "expulsion" of the Aquarius, and Mars, usually responsible for the "fall" of this House. As a result, even dire enemies will fight by the side of the Aquarius. Mercury will certainly be a leader, especially since in addition to being the planet-exalt, he will play the role of the "celestial leader" of the entire Air trigon. For the Aquarius, this will be a very positive moment, especially since in July; all of their activities will be tied with business and finances in one way or another.

In terms of particularly the working sphere, July 2014 will bestow a plethora of unforgettable experiences upon the Aquarius. Most likely successful experiences, but unforgettable ones for sure. Do not worry and do not be surprised, the stars just hint that you will face many situations that despite their seriousness, will manage to definitely humour you. Living with a smile on your face is certainly easier - we know this cliche from childhood. Sadly, we forget about it with age. July will remind us about it, in the most bright and positive colours! A coworker's birthday is threatening to grow into a serious party, like you have never seen before. The realization of one more project and a party about its successful launch will also bestow you with unforgettable experiences. Perhaps some of your colleagues of business partners will turn an unexpected side to you (quite unexpected!). Undoubtedly, there is some aspect that is connected with the possibility of having an office romance, but about that later. In terms of work, the stars recommend that you remain open with yourself and prepared for nonstandard solutions. Be yourself; do not aim to be liked by everyone. Your work is part of your life, and you should live your life the way you want to.

Moving on to the area of personal relationships, first and foremost you should note the moment we have mentioned above. There is a high probability that someone from your colleagues, partners, or management will develop a strong emotional feeling for you. If you are single, then there should be no problem in this sense. Let your emotions go, without a drop of doubt fall head first into the sea of sincere and honest feelings. The subject of your emotions will do the same - do not worry. Do not worry about your colleagues, they will understand everything and will support you. Some ambiguity will only arise if you already have a lover. However, no one can make that complicated choice for you. The choice will not be a trivial one, but try to make it so it does not complicate an otherwise very positive period of your life. Solve everything quickly, the way your heart demands it. Do not worry about making a mistake, just do not stop in the face of trouble. Maybe you will not be right, but at least try not to hurt anyone's feelings too badly.