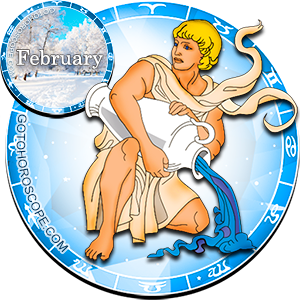 In February 2015, the zodiac sign of Aquarius will live through a relatively positive life stage that may manifest itself in a whole sea of important and large-scale outcomes. First, you need to realize that the Sun, the celestial body responsible for the expulsion of this sign, will change the direction of its energy and instead of traditional negativity will supply the Aquarius with a powerful blast of positive energy. Moreover, the Sun and Mercury - the exalt of the Aquarius, will most likely work together, which will lead to their positive impact being even stronger. Mars, responsible for the fall of Aquarius, will also strengthen his emanations due to some general combinations, although all of his attempts will have no result, because Saturn - the planet-ruler of this sign will be strong enough to defend his proteges. As a result, February will be a month that is fully positive for the Aquarius; not too rich with opportunities, but absolutely without any problems or significant barriers. This will especially influence the work sphere of the Aquarius's life, allowing the latter to significantly fortify their positions.

Speaking about the sphere of entrepreneurship and finances, in February 2015 the Aquarius will suddenly realize why he or she was incapable of implementing one or another project. This sort of revelation that will occur during the dawn of the first ten-day period, will allow the Aquarius to optimize their resources and raise the results of their work. If you have your own business, then you may be confident that February is the best month for total modernization. Replacing human resources, improving technical equipment - any aspect that you will dedicate some attention to will receive a powerful dynamic development. If you are just a line employee or do not have an "important" position in the company, then your strategy should be no less active, but much more precise. Do not act directly, try to find some more ergonomic solutions. It is likely that diplomacy will become your main weapon, which with some luck will lead to some unexpectedly bright results towards the end of the second ten-day period. The main thing is not to doubt yourself and your efforts, especially now - when the stars are fully on yours side.

In terms of the sphere of personal relationships, in February 2015 you will finally be capable of reaching absolute harmony with your lover and will come to a set of conceptual resolutions that will fully satisfy you both. You understand this perfectly yourself, which is very important and will determine your further wellbeing. If you are alone, then be confident that you will certainly meet your second half in February. It is difficult to say how serious this relationship will get, however, it is evident that you will receive as much positivity as you can from its development. You should pay special attention to the relationships within your family. It is likely that you have been observing some negative tendencies for a while, the result of which may be an end of relationships between people close to you. You have the ability to stop it and no matter how it sounds, no one but you can change the situation and turn it for the better. So focus and enter the conversation at the right time. Although do not take sides no matter what, be as unbiased as possible, let the heart lead you - not the mind. It will be complicated, but quite possible, especially since you will have the backing of all of the planet patrons of your zodiac sign.

Im also Aquarius. 1962, living in Czech Republic. 1962 was a very special year for Aguariuses, for its planetary sttelium.

Here Im reading comments that are oposit to each other. :-) Please, think of the fact that we "see" (our live and everything) the way we are. ;) We just expresing in words (and actions) how we understand what we experienced. Our point of wiew. Our selfs, how we are and what we think, our morals. And that sort of predicts how we gonna be in the future.
We react to our mind with emotions and that is whats "worx or plays" huge role on our future and btw also co-creates the quality of our body. Energy of emotions!!
Change your mind and the body will follow. Change you mind and your live will change together with your point of wiew. ;)

Astrology is very complex and to do a "precise" prediction for only 12 types of people and say it in the way that everybody understands the way it was ment, well its not possible, unless you are nothing less then God. Dont forget that even the astrologer is human and "see" the way he or she is.

So watch your emotions and learn from that about your self. Peacefuly and with joy. Sursum Corda.

How insightful your readings are! I am amazed, truly, by how very close your predictions are coming to the actual events surrounding my circumstances, and my ability to focus, especially, on business activities. I sometimes get the feeling your total predictions have been tailored especially for me - and not without merit, for the success of many rides on my performance in certain career areas!!
Thank you.
18 February, 2015.
[Reply] [Reply with quote] [Cancel reply]
russ 2015-02-09 14:24:31

this seems a little far removed from other readings and what im experiencing this february especially with mercury retrograde- im not so sure about this
[Reply] [Reply with quote] [Cancel reply]
hiralal goswami 2015-01-31 11:38:12

thank you for giving particular planet analysis for Aquarius People of the month.
So good
Raj

Thanks. this very interesting and very motivational.im excited now for other good changes next year... more good vibes to everyone...
[Reply] [Reply with quote] [Cancel reply]
Madressel 2014-10-21 20:39:21

Thank you, very useful. The overview of 2015 also is very welcoming. I do believe the changes, I'm already feeling some of them but, are plannings for the future, so the changes are coming up next year. Incredible!
I'm glad to visit this page before I buy my tickets and start other things.