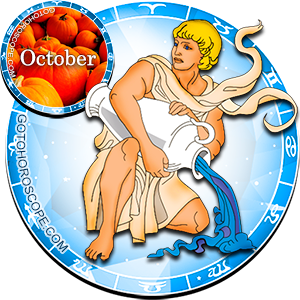 The second month of autumn, October 2015 will bring the zodiac sign of Aquarius a lot of amazing events which, however, can be interpreted in different ways at the same time. Due to the rather unusual interstellar combinations during this period, it would be foolish to rely on simple solutions, which is why Aquarius will have to try to find the most positive way out of a situation. Although, the energy situation around the sign will be positive in general. Mercury, the planet-exalt of Aquarius, will retain its position and will provide his proteges with confident streams of powerful, dynamic vitality, which will come in handy, because the Sun (traditionally responsible for the expulsion of the sign) will be strong. However, in any case, the solar energy will completely dry out before reaching the goal, because the dynamics of Mercurial energy flow will be much higher. Mars, responsible for the fall of Aquarius, will change the modality of his emanations and will become a staunch ally of this sign. Unfortunately, Saturn - the planet-ruler of Aquarius, will change its preferences and screen through its own positive impact.

As a result, October 2015 will be quite a fruitful time for the zodiac sign of Aquarius in terms of business and entrepreneurship. The main thing is not following the people whom you do not trust. It does not matter what you say or promise, think first. You know very well what to do, even if you do not always find the logical arguments to objectively support your risky actions. Move in the direction that you have defined for yourself, otherwise your ship will suddenly fall off course, throw itself on the reefs and leave you on the deserted island. In other words, do not throw yourself on all sorts of adventures for adventures' sake. Do your thing and trust only yourself. If you have your own business, then it would be logical to postpone the global changes in favor of small upgrades during this current stage. At the same time, those who work on themselves are recommended by the stars to be as active as possible and achieve your goals no matter what.

The love front will be somewhat more dynamic and ambiguous than the working direction for Aquarius in October 2015. There is a high probability that you will find someone who will dramatically change all of your priorities. But do not think that everything happens for the best, because there is a lot that will depend on you and you only. Think carefully and analyze the situation, in fact, an uneasy dilemma is likely to appear in front of you. Quite possibly, you will have to decide to leave your family or to break off relations with your current lover (much will depend on individual factors, which at this level are impossible to determine). But no one says you will be behaving badly. Stars can give just one piece of advice - act in accordance with your conscience. The rest of October will be a rather quiet time in terms of the sensory-emotional sphere, although at times you might find some unexpected, bright surprises that will likely remain in your memory for a long time. Do not fear the unknown, feel free to do what you want to do regardless of the opinions of others. This is your life and living it is up to you, not anyone else. Therefore, even under the most austere circumstances, you should not forget to give free rein to your lover, at least sometimes.