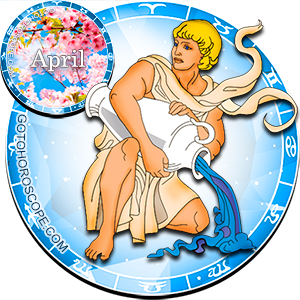 For Aquarius, a representative of the fixed cross of the air trine, April of 2016 will be a vivid and memorable time, but not necessarily constructive. Your current exaltation, Mercury, will renounce its powers and become your fierce opponent capable of destroying all your plans within seconds. Therefore, from the very first days of the month you might encounter some arguments at work. But it is unlikely that they'll pose some really tough situations, because all the powers of the lord of the earth and celestial trade routes will unequivocally fade in comparison with the energy of Saturn, the planet-ruler of the sign of Aquarius, which in the peak of spring will be exceptionally strong and dynamic. Moreover, Saturn will be backed by the great heavenly warrior, Mars, which in its normal is position responsible for the "fall" of Aquarius. As a result, the positive effects will prevail over the negative ones, and it might lead to a favorable outcome. However, we shouldn't forget about the so-called "human factor". If you are reluctant to change anything, nothing will change. And even the most powerful astronomical emanations won't be able to affect your desires and aspirations.

Your work life in April of 2016 will give you a unique opportunity, or rather a choice, which in its turn is likely to lead you to new opportunities. What exactly will happen is hard to tell considering there are so many purely individual factors that can influence the situation. Therefore, it will be necessary to keep your vigilance high throughout the month, simultaneously contemplating the necessary changes that will work to the advantage of your business. This month can become stagnant for you, but if it happens, you're the only one to blame for it. However, it is possible that you need some sort of a break or a decrease of your dynamics at work. Sometimes these moments allow you to better evaluate the situation and make the only right decision, which in the future could be decisive. Therefore, it makes sense to refrain from following your instant desires and sudden gusts. Despite the awesome power that you will be entrusted with due to the influence of Mars, keep in mind that a consistent and peaceful settlement of the problem is always the best option. Also pay more attention to your colleagues, to be more exact, to how they work. It is unlikely that you'll learn something from them, but you might be able to help them.

Your sensually-emotional sphere will be much brighter, but maybe not as consistent as you would like. In April of 2016 something is likely to happen to your relationship. You will either face a break-up, or vice versa, experience a new and very "serious" crush. Therefore, it makes sense to complete all your urgent tasks in the first decade of the month so that there's nothing to distract you. Try to minimize the number of conflict situations in your family, even if it's obvious that you are right, just give in, keep it quiet and move aside. Those loved ones who disagreed with you in the first place will soon realize how wrong they were and then everything will go back to normal, with your credibility being seriously elevated. It is important now to maintain the stability of your emotional state so that your view of the world is not clouded by family squabbles. In fact, it is essential in any situation, not just during the current stage. But now your "clear" judgments will be particularly useful, as it will allow you to objectively assess not only your position but also the situation in general. That is, April of 2016 will become for you a largely cognitive stage of life.