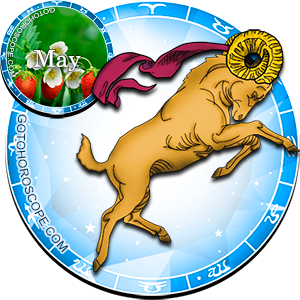 The zodiac sign Aries in May of 2016 will encounter a range of unpredictable situations, which will be radically different from what the representatives of this sign might have expected. On the one hand, you will be able to easily achieve the desired outcome as the levels of your vitality will be in good shape thanks to your exaltation, the Sun, which will work in your favor. But at the same time, the traditional planet ruler of Aries, Mars, at the end of spring will make up its mind to not only openly "neglect" its responsibilities, but also "bring you down". This is the red warrior that is to be blamed for the fact that many of the events in your life during May will not develop the way they should have (at least according to your personal plans). And it's a really important point that should be taken into account during the upcoming stage, even though you will fail to be fully prepared for what's coming; the thing is that the range of possibilities is so wide that it is impossible to accurately and unmistakably predict what will be awaiting you at this stage. Nevertheless, you will have Venus and Saturn as your allies, the planets that in their normal position are responsible for the "fall" and "expulsion" of the zodiac sign of Aries respectively. In general, the situation is quite exceptional, but that's what makes life more interesting, isn't it?

In the working sphere, in May of 2016 Aries will have to fight more than one "battle" to implement their plans to the fullest. It is vital to understand that you are really capable of reaching the final line of the projected path no matter what. You can either regard the things happening around you as a kind of ordeal or you can completely ignore the "hurdles" set up by destiny. In fact, your perception of the ongoing problems will hardly change anything now; the main thing is that you stay strong and under no circumstances give up. Keep marching forward, albeit not as fast as you've planned. Pull yourself together andģ learn to trust people! You're unlikely to succeed now without third-party support, so you'll have to find those you can really trust among your colleagues (or partners, if referring to your own business). It's high time to get rid of labels and prejudices and take a new look at the world, honestly and impartially. Even if you think you are "surrounded by idiots" (sorry but it is too common an idea to omit) and for many years this statement has only proved to be true, it does not mean that you'll make a mistake by giving someone a second chance. All you need to do is to stay alert, avoid letting things take their course and leaving people alone with problems when you have what it takes to help them and teach them something new.

Your "love life" will somehow resemble your working area, but in this field Aries will have to be much craftier. A lot will depend now on your ability to "talk about nothing" and on how well you are familiar with the metaphysical approach. Regardless of the common saying, your communication skills will be your best friend, despite the fact that quite often you will "talk nonsense" in the fullest sense of this phrase. Keep in mind that it's true that not only women "love with their ears". Therefore, speak a lot whether there's a reason for it or not. But at the same time, refrain from annoying people as this can bring about the opposite result. Your diplomatic skills will come in handy as well as your ability to adjust to any situation and still be able to defend your own interests. This time period will be especially striking and bright for single Aries, who don't share the burden of personal relationships. But this doesn't imply that "family people" will remain on the sidelines. As a matter of fact, you are free to choose the course of your actions, always and everywhere, just make sure to make allowances for the circumstances.

May 2016 monthly Horoscope for 12 Zodiac signs