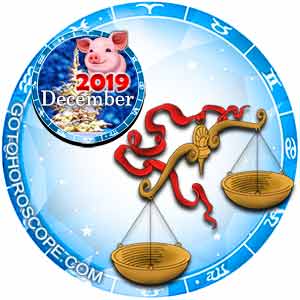 You've had a trying year, Libra, and December is when you'll start to see your fortunes improve. What's the reason for the sudden increase in your good luck? If there's one celestial force to give credit to, it would be Jupiter making an appearance in your life. He's been lingering in the sky since early November, but now he's showering you with good luck and blessings. Usually, these are things that people have to work towards, but you've done enough this year, Libra. You have a month of just letting this goodwill shower over you. Enjoy and pay attention.

Work will continue to be work for you, but you'll start to see a bit more praise coming your way. This might not be anything big: it could be on the level of a superior saying ‘great job' to you. But it could also be a raise or talk of a promotion. What's important isn't the scale of whatever comes your way. It's that you notice that they notice. There have been people trying to sing your praises for a while and you've probably missed the song. When you have your nose to the grindstone, trying to pull ahead, you're not in a good position to pay attention to these things. Pay attention to them this month and allow yourself to breathe a little. You've worked hard. You deserve this.

This makes it a perfect time to think about longer-term career ideas. Has there been something you've been thinking about pursuing in your spare time? Or when you're retired? Or when you magically win the lottery? (And note we're not saying you should play the lottery, but if you do - hypothetically, of course - you might want to buy a ticket around the 10th or so). Well, why do you think you should wait for that so-called perfect time to pursue it? That time is now, or at least it's time for you to start investigating what's involved and what your next steps are. This might mean taking a class at a local community college. It might mean something as small as doing a bit of a Google search. You've got this breathing room in December. Use it.

Financially you should have a bit more luck during December. This doesn't mean a bag of gold coins is suddenly going to fall into your lap (but prepare for that possibility). It does mean that bills that you might have been expecting will either be much less than you thought or will disappear completely. It might mean a check you forgot about will show up in your mailbox. Again, none of this will enable you to run off and buy an island (but if it does and you do, please don't forget us), but it does mean breathing room (that phrase again) and the confidence that comes with it. Look for these to happen either around the 10th or the 26th. In general, you'll want to be thrifty and a little frugal, but don't skimp on presents if that's your thing. In fact, make sure to pick up a couple for yourself.

You've had a trying year, Libra, and you're way, way overdue for a break. Starting around the 27th or so, you'll want to make sure to pencil in some quiet time for yourself for reflection. This doesn't mean sitting on your couch with the TV on. This means it should be truly quiet. Get away from your electronics, sit by a window or a roaring fire, pour yourself a mug of your favorite hot beverage, and think. You're going to think and reflect on the year you've had, what you've been through, and how strong you've been. You're a fighter, Libra. Then you're going to start to look ahead to 2020 and figure out what you want to do differently and what you'll no longer put up with. December isn't just the end of a calendar year, it's also the end of this great cycle with Jupiter and he'll haul away any garbage in your life you no longer want around. Do take him up on this offer.