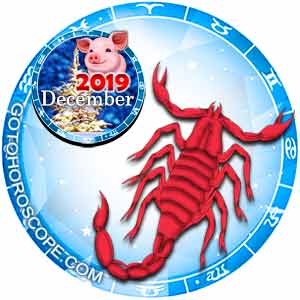 Usually, you're great at being completely in control of things, Scorpio. That's not to say you're going to drop the ball in December. No, you'll continue to have your life well in hand, except …. Well, you're going to face some unexpected curve balls this month that are going to shock you. That shock is going to be you recognizing how, in fact, you can't control everything that happens to you. Don't worry: nothing terrible is going to happen, but you are going to have a real shake-up of your world view as a result of this. This is a good thing, though. Situations like this are when people actually learn and grow. So think of December as your learning and growing month.

That new moon in Sagittarius on December 7th will inaugurate this period of learning for you. That will be when you first encounter situations in which your usual bag of tricks doesn't work and you have to actually pay attention and figure out what you need to do to get through. If that sounds stressful and like a bit of work, well, that's because it is. You are up to the challenge, Scorpio. Press through and trust that the universe wants you to succeed because it does. Think of December as your exam week.

The clearest manifestation of this period of challenges will be in the workplace. You're going to be presented with something in the first week of December that seems like a daunting, ominous task. But guess what? It's the beginning of a new stage at your job. Think of it almost like an evaluation period to see if you're ready to advance. The big difference is that this isn't an evaluation that anyone else is going to make. No, you're going to be the one to judge the results. This is the time for you to figure out if you want to advance in the job you're in, or even in your career in general. By the end of December, you'll have passed through the experience and you can decide: was that worth the stress? If the answer is no, guess what's going to be your big project come January? That's right: time to start the process of looking elsewhere. But in the meantime, give your job your all this month and really test it (and you) to the fullest.

While you may have felt in control of your emotions in the past, Scorpio, don't mistake controlling your reactions for controlling your emotions. Yes, you've been good (mostly) at holding your tongue when you've needed to and not telling off people who have made you mad. What you haven't been comfortable facing, however, is that some people are just going to make you feel things you're not a comfortable feeling. There's no shortage of people who will make you mad, but we're also talking about when someone is so attractive to you that you don't know how to handle it. Maybe it's someone that you know is wrong for you on some level, or maybe it's someone who just drives you nuts. Not to make this sound like a Hallmark romantic comedy about mismatched lovers who take the whole movie to find each other (please don't be like that), but you're going to be struck in December by the fact that you have some pull, some connection with someone you'd rather you didn't. It's probably someone you know already but it could be very outside your usual social orbit. You don't have to run off and marry this person (in fact, don't. At least not yet), but you do need to sit with your discomfort for a bit. That's going to be more valuable to you than anything else. This is the time where you need to sit with these emotions you can't explain (and maybe don't want to have) and just acknowledge: yes, I feel this way and I can't control it. And that's okay. You don't have to act on any of them, but that experience of acknowledging what you can't control is going to be invaluable to you, Scorpio. It's going to be the most valuable tool in your toolbox in 2020.