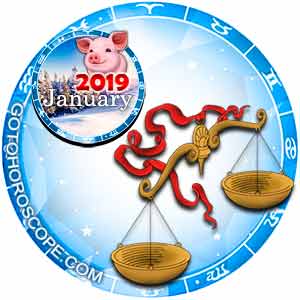 January 2019 for representatives of the Zodiac sign Libra will be quite indicative of the times. Throughout the entire month, Libra will have to tackle tasks and disputes, but you will not only always come out victorious, but also derive a great deal of pleasure from the process. Such a dynamic and atypical situation will develop because Mars, usually weakening the position of Libra, will enter into conjunction with the Sun, which has dominated the celestial plan for the entire period. At the same time, the Sun in its usual position is responsible for Libra’s issues and fears, but in January, as well as throughout the year, its energy will be benevolent due to the current astrological situation. As a result, it is recommended for Libras not to change their plans under the pressure of circumstances and more often to trust intuition, instead of the advice of people who have hardly achieved significant success themselves.

The first third of January 2019 will give Libra a unique opportunity to test the limits of their abilities. During this period, events may not be as intense as in the middle and at the end of the month, but for Libra personally, many situations will turn out to be inherently significant. The horoscope recommends that you stay true to yourself and not act on provocations from outside. At a certain point, it may be necessary to seriously slow down your pace and this must be done. If you need a change, then you need to start with yourself first. It is important to pay maximum attention to your immediate surroundings. Also, in this period representatives of the Zodiac sign Libra may encounter several new or relatively unknown people. It will a positive surprise that many people with whom you wanted to establish relationships with but for one reason or another could not or did not have the time to, will themselves come to you. Be sure to take advantage of this situation, not only in the field of personal relationships but also in your professional life.

In the middle period of January 2019, the trends established for Libras at the beginning of the month will continue to develop logically. Here, the stars recommend not to refuse corporate events or other events during which you will have the opportunity to communicate with colleagues and management informally. You will see your chance, make sure to take advantage of it. However, during this time some Libra mays may feel an overwhelming desire to change the scope of their activities. In this, you need to be attentive. It makes sense to follow the direction of sudden desires only if there is a real possibility of them coming to fruition. If such an opportunity is not foreseen, then one should not even pay attention to such emotional outbursts. In the middle of the month, for Libras who have their own business, it is recommended to behave in a slightly more restrained manner than usual and to deal with any situation that has the potential to turn out negatively. Be decisive and relentless, but do not forget to give your subordinates an opportunity to rest.

The third period of January 2019 will see the logical conclusion of the first month of the year for Libras. Those who decided to make significant changes will successfully complete current projects and be able to move to a new level. This may concern both earnings and some emotional moments. At the end of the month, Libras should not be afraid to tell others the truth and to act in a way that has long been wanted. It is important to tie up any loose ends now in order to approach the next period without any extra load. Usually, for Libra, an authoritative opinion is crucial. At this moment, this tendency will recede into the background and that will be okay; in fact, many representatives of your Zodiac sign will literally open up new horizons for themselves without needing outside support. In conclusion, let us pay attention to the sphere of health: in January 2019, Libra is unlikely to expose himself to serious risks, but if there is a chance you will come down with a sickness, so it is best to spend as little time as possible with people who have viral infections or other maladies. The exception is people who are close to you. This is only a small thing that should be taken into account, because, in general, the final period of January 2019 is a positive and successful time for most of the representatives of the sign of the Zodiac Libra.