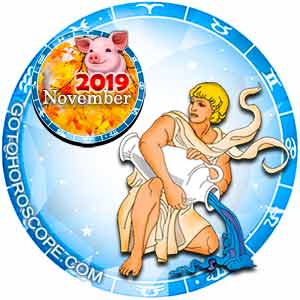 This has been a hell of a year for you, Aquarius. Maybe you've weathered a ton of bad luck, or you've been working your butt off, or you just feel tired from everything and in need of a break. Whether you realize it or not, you have been through a lot and it's taken a toll. November is the beginning of a bit of relief for you. Why now? Well, there's one big reason in the sky. You see, the sun is sitting opposite Uranus towards the end of the month and that casts a big shadow (as it were) over the entire month. But it's a good shadow: the kind that gives you a little relief when the sun is blaring down on you. This breaks that metaphor, but it's apt: you're going to start seeing the ice thaw a little bit and bits of warmth come through.

Uranus has a tremendous force on you in November and this year overall. Luckily, it's a positive force, or rather, it can be if you're prepared for it. What does that preparation entail? Lots of things, but for you, Aquarius, it's mostly about giving yourself a break and cutting yourself some slack. This doesn't mean to let yourself go, but let's face it: you've worked very hard this year. Maybe it feels like you don't have anything to show for it, but the fact is: you've built up some very resilient muscles, whether physical, mental, or emotional. It's time to start using those muscles.
Working has been a huge burden for you this year, right Aquarius? Either the job is wearing you down or looking for a job is making you so discouraged. Whatever your situation, you've had enough. Keep your chin up and prepare for good things toward the middle of the month. This could be anything ranging from the boss saying to leave an hour early to an amazing job offer. Granted, that's a big range, but here's why it's important: it's going to come at just the moment when you need a bit of hope to go for something bigger. And this will be that thing that lights the candle inside of you. Follow that hope to great things, Aquarius. That's going to be your mantra this month.

If working has been a struggle, money has been its cousin. It's been hard to pull ahead, or at least to do so enough that you feel like you have some breathing room. This is another time to look for that faint glimmer of hope around the middle of the month. There could very well be a little bit (and we do mean little) of money coming your way at this time, or at least the promise of more of it. The important part is: it's the spark to get your hope going because the bigger riches will be down the road. Don't think the gains you make this month are it. This is just the start.
Relationships are tough for anyone. Maybe for you this year they've felt like more stress than joy. That's hard and would wear anyone down. But you, Aquarius, you are made of stronger stuff and you know the value of connections to people that last a long time. Go to those long-standing relationships: either friends or lovers you've been with for a long time, or even family members. These are the people you need to surround yourself with this month. Outsiders and people you've just meant are worth keeping just a little distant for the time being. You don't need to cut people out, but it's time to circle the wagons a bit with those solid connections.

But the biggest area where you need to give yourself a break is with your health. Aquarius, you've been running yourself ragged this year. It's time to stop it and sit down. It hasn't done you nearly as much good as you think it should have. Stress and anxiety are going to be the death if you don't manage it. Recognize that the universe is telling you to stop and smell the roses. Then stop and smell the roses.
You deserve a break today, Aquarius. You've got Uranus in your corner, telling you to take a load off. It's willing to shoulder the burden for you. Don't worry: you'll get back to business soon enough. But isn't it good to see a little light at the end of the tunnel? That's December, and it's got great things in store for you.