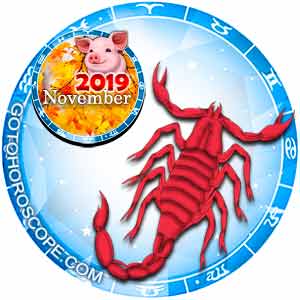 Remember taking standardized tests? November is like a little mini SAT for you Scorpio, where you need to confirm that you've actually learned the material you've been studying for the past several years. You may not have realized you were studying, but that's what life has been doing for you: providing you with years of instruction in the form of many, many life lessons. The big question of course is: have you actually learned anything from those lessons? Well Scorpio, you're about to find out. Pencils out, because November is going to quiz you big time.
If there's any planet to blame for all of this, it's Uranus. Think of it as the person in class who kept asking if there was homework this week. Uranus is situated opposite Mercury and Venus around this time and that is making things testy for you. That's okay, though, because you've been preparing for this for the past few years. Turns out you've learned quite a bit about life and yourself. The tricky thing is accessing that knowledge. You're up to the challenge, though, Scorpio

Jobs have been tricky for you in the past. Either it's been work you didn't like, or it didn't pay enough, or you just haven't felt like you've found your one true calling. It's been a hard area for you to get your footing. The fact is: you actually know what it is you really want to do, deep down. It's so obvious to you that it's staring you in the face. Maybe you've written it off because you don't think you can make a living at it. Maybe you just don't think you're good enough. The experience you've had will show you this month that, in fact, you can do that thing and the time to do it is now. There's an opportunity to make a decision on that front on or around the 14th. Seize that moment.

This is the month to confront your biggest financial challenges. Are you carrying more debt than you should? Is saving a hassle that you can't seem to swing? Do you just want to be wealthier than you are and don't know where to start? Once again, you've done the homework on this. Maybe you found you're going about saving all wrong. Maybe you just need a budget. Whatever the answer, it's the most simple and obvious one. There's no magic bullet here. Follow your instincts. Luckily, you'll be getting some outside financial help around the 10th or so. Take advantage of that generosity.
You already know what you need to do for your love life. It doesn't matter if it's a question of making changes in a current relationship or pursuing someone you've been interested in for a while, you know that something difficult is ahead of you in order to be happy with someone. It's okay. Relationships can be very difficult at times. It doesn't mean you're doing them wrong. Lean into those tough choices, but get some help and support if that applies to your situation. The best time for these talks is right at the top of the month. Shoot for the 3rd if possible for the best outcomes.

Stop putting off that doctor's appointment, Scorpio. You know what you need to do. Make that appointment that you've been thinking about for months. If possible, shoot for making it for the second week in November. Not that that will change the results at all, but you'll be in a better frame of mind to take whatever advice the doctor gives you. You deserve good things, including good health.
Pencils down on December 1st, Scorpio. Until then, you're going to be in exam mode. It might mean the occasional late nighter and a quick cram session, but the fact is you already know the answers. Studying for standardized tests is mostly about learning to be confident in a testing situation. That's exactly what you'll need, Scorpio. But guess what? You've got that confidence inside you already. You're just ready to demonstrate that you know everything about the main subject of the test: you. But no talking with your neighbor.