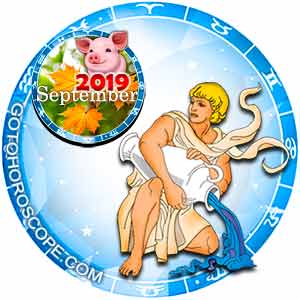 Aquarius, September 2019 is a big month for you. Unlike most people, your changes will be on the outside, and the inward changes will come from decisions you will make to get there. There's a big opportunity for you in September, but with that comes facing some fears you have. This could be a physical move to another country or somewhere equally as alien to you, or to a different job that takes you to a whole new environment. It could be a decision that changes you physically so that the world around you reacts to you differently. There are many sides to this choice.
With that said, it will be no surprise to you that September brings new friends. At first, though, your relationships will be strained. Not everyone will be pleased with this choice, and the direction they're unhappy with is entirely situational. You will greatly dislike making people unhappy. But seeking your own happiness will be intriguing, and though it will take some time to finally make the choice, to start the process. There will be a great relief on all ends when it's all over. The turmoil of indecision will end, and you can start fresh.

And that leads to new friends! These will not be your usual easily charmed, but not easily made good friends sort. They will be slow to trust you, and you to them. It will be mutual footing. And you won't have to put up a front or be someone else. You'll be too out of your element for that. All there will be, will be you. Libra season is a great time to get to know people as themselves. And it's a great time to be seen for who you really are, for you personally.
Now, this does suggest a sort of breaking away from old friends, as well as old social behaviors. This doesn't mean cut everyone out of your life. There is a natural attention shift to what's happening in front of you, but touching base back to your origins will not hurt it. Just don't be surprised if things are going fine without you.
There's a lot happening with work as well, as that will be a place to grow and explore, and meet new people. But it could also be a place that you are tempted to bury yourself in and forget the anxiety you have about everything. Be wary of this impulse. It's not healthy, and it won't help you move forward.

The first part of September might have more of a lull surrounding work, maybe as you're preparing for the move, or maybe as a catalyst to the decision. This could be stressful financially, which will be another source of strain between you and someone close to you. Keeping this in mind as you move ahead, be aware that it looks okay for the rest of September, and whatever new pursuit you've found will make up for that time period.
The second part will be really exciting, slightly scary; it's probably been a while since this much has happened at once in your life. It's important not to fall into bad habits, and to be honest about the extent of your knowledge and if you may be wrong about something. Remember, Mercury is in Libra, so communication is all ears and people will be willing to work with you. Working hard will not be out of the question, but keeping yourself well taken care of and giving yourself a break is very important.
You sense of self is going to be tested, pulled, driven, changed, exposed, comforted, and validated. There's going to be so much happening, that being centered and balanced might seem laughable.

During Virgo season, you're going to be stressed and distracted. You won't be too concerned with organization or planning, even if you should be a little bit, and as such, you'll be at odds with everyone else trying to move forward. You'll be stalling, trying to make a choice, and the longer you do that, the more conflict you'll feel, and the more you'll take it personally. So be aware that it's not you. You are allowed to blame Virgo season.
Libra season, however, which is oddly enough not normally a big decision-making time (but apt since Libra's themselves take so long to weigh out the options that they seem indecisive), is when you will decide and move forward. And everything will seemingly click into place. And you will feel it deep in your heart that it's what you've been floating towards your whole life.
This month will be a lot for you, so keep that in mind, and just take it one day at a time. Don't be intimidated. Well, you can be, it's reasonable given the circumstances, but remember that it's going to work out for the better. Staying still just to not risk conflict never got anything done.