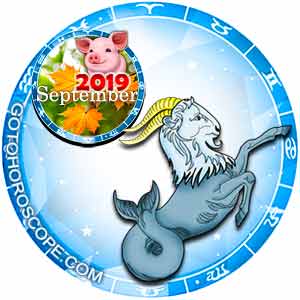 Capricorn, here you are, an Earth sign, starting September 2019 whilst in an Earth season. You feel secure, calm, maybe a little overworked, or stressed you're not working enough, though most likely that's not the case. Largely, you are even keeled and ready to take on anything, you're pretty certain. The whole month won't be this way, but because Virgo season has given you the kind of focus you feel very comfortable with, you will not be meeting Libra season discombobulated like others will. You will be meeting it very combobulated or, to clarify, already quite balanced and not in a major need of adjustment. The rebalancing around you might cause you a little disturbance, though, and it's best to keep aware of what's happening and how it'll affect you in the long run.
Socializing will come easily in the first part of September, and you will have nice little get-togethers with friends and colleagues alike. Don't be surprised if other people get wrapped up in their own work focus and show up late or beg off to go to bed early. You'll be fine. Making new friends is also something you're naturally good at, especially when you're feeling good.

The second half will be a little messier. Not for you personally, but you might notice that around you, your friends are having really big realizations, life changes, all sorts of things. You're down to help out and be there for them, but at the same time, you're cautious to get involved. That's alright, and you can still help without being the one that takes on everyone's problems - because really no one should have that job. It should be an even distribution, a give and take, especially during Libra season. You should be able to communicate your needs clearly at this time as to not hurt your friend's feelings about being a little standoffish. It'll be easier to be delicate and to the point than perhaps you usually are.

Work is going to be smooth sailing for the first part of September. You have it all down, you're focused, and so is everyone else, which is nice, but not imperative. You're always social at work, with a good head about you in terms of when to stop being social and get back to work. This can be refreshing to some who will be too focused to take a break. It's probable that you won't annoy anyone any more than you normally do by your good-hearted attempts to get people to take care of themselves. You also will lead by example and have a good idea of how to keep yourself well fueled and well rested.
Libra season finds you surrounded by socialization even when you weren't expecting it. You're no longer the seeker of conversation, it's finding you, and not always when you want it to. Socializing with co-workers will become more frequent and you might have the hit the breaks at some point as you become too close. At the same time, the work itself will become too easy, too dull. You might be entertained long enough to stick through September, but it's unlikely. Looking for another job might be on the horizon, which is either a great reason to not worry about boundaries with your co-workers since they'll just be friends soon, or a reason to worry because they'll be upset you're leaving. It's, however, your decision and doing things for other people is something you may have done in the past, but are not interested in right now.

Your internal workings are very logical if a bit obtuse sometimes. It depends on how you go about things, but usually, you're pretty attached to pattern and routine. You also really love breaking out of that routine, but you are unable to do it more than once or twice a month usually, for fear of losing your routine entirely. September finds you all around feeling very routine. Virgo to Libra; you transition easily from one to the next. Introspection isn't a big deal to you, you don't really feel the need to. Going forward, getting things done, finding time to be by yourself, these are your self-healing techniques.
And if you're planning a big shift in routine, it's good to stick to your smaller routines no matter what, for example exercising, diet, even just when you feed the cat, even if you're in another country - stick to your routine. It will give you a baseline to hold onto through chaos.
September will treat you well, Capricorn. And if unforeseen life events do fall upon you, you've got the strength and the harmony to face it and deal with it. Just remember you do have weaknesses, you aren't infallible, and it's important to mind your own space when others are in need.