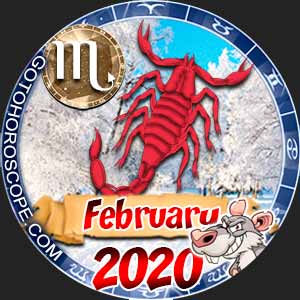 February wears everyone down. Winter is slowly winding down and everyone is sick of it, ready for spring. It tends to fatigue the world, making everyone operate at half speed. That's certainly going to be the case for you, Scorpio. You're going to enter February stumbling through the front door, arms full with important papers that will spill everywhere. That might not sound too promising to you, but it's actually an auspicious beginning to a trying month. It will lead you to bigger and better things.

There's some interesting activity in the skies for you in February. Mars is going to enter Capricorn around the 16th of the month, supercharging everyone to varying degrees. This is really going to do a number on you, Scorpio. Mars will bring you waves of money and power, but the way he does this might not be immediately apparent. It might be better to describe it as: Mars will bring you the possibility of money and power if you know how to harness it. So how will you do that? Well, that would be telling, Scorpio, but let's put it this way: there will be a number of weird forces at work around the 16th, so if you see anything unusual happening in the world around you, you might want to lean into it. And we'll keep it as vague as that.

That does mean you'll want to keep a close watch on your finances for the rest of the month, though. The world is going to go through some economic shake-ups, meaning a lot of people are going to start to panic. Don't follow their lead, Scorpio. Keep spending and saving as you have been already, but if you've got some long-range ideas for your money, this month is the time to start drafting up a plan for it. That might mean meeting with a financial professional, or it might just mean writing down a plan for yourself. Start that process rolling.

This is going to be a trying month for your health, and we're not just talking about winter cold and flu season (although that will certainly be a factor. Make sure you bundle up.). You're probably wearing yourself down a bit and getting fatigued. This is not doing your body any favors, Scorpio. Spend the second week of February indulging in a little self-care. You don't need to spirit yourself away to a week-long spa or anything like that (but if you have the means to do so, by all means, do). Get plenty of rest during this time, don't skip any meals, and spend at least a small portion of each day sitting still and meditating. You have a ton of work ahead of you through the spring, so you need to make sure you're caring for yourself properly. If you can take a day off on the 10th, do. It'll work wonders for you.

Keep your family and loved ones close to you in February, Scorpio. The winter can be hard on people and those people might not let you know that they're struggling. Not to sound negative, but it will be good for you to assume the worst and proactively be there for the people around you. The first week of the month is going to be a tough one for a lot of astrological signs and they're all going to look to you to be their bedrock. You might not be in the best position to help them out (or at least not feel like you are), but that's the time for you to fake it until you make it and be there for them. If you have a Gemini in your life that's important to you, see what they need first. They're the one shouldering the biggest load these days.

A new moon on the 7th will appear in the skies, casting a healthy glow over Scorpios everywhere. What will this mean for you? Think of it as a great bodyguard standing behind you during this time, having your back as you tumble into the month. Remember how we said this month will be leading to bigger and better things? That moon is going to guide you to them and give you the strength you need to tackle whatever comes your way.