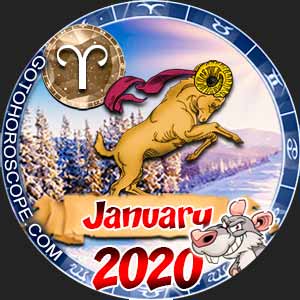 You are going to be a force to reckon with in January, Aries. There are lots that will be thrown at you and lots on your plate to deal with, but that's just it: you will deal with it in a way that is uniquely you. Jupiter has had a lingering effect on you from December and that's no doubt brought a bunch of extra things on your plate. But the universe knows that you can handle it. January is when you're going to show the people around you that you can handle anything the universe dishes out to you. It's going to be a bit like you're bursting out of the gate throwing punches.

So start the year off right by doing just that: look for any confrontation that's been overdue for a fight and get it out of the way. You might have a hard conversation that you've been postponing that needs to happen. Guess what? Treat it like your first prize fight of the year and come out swinging. But note: that doesn't mean you have to immediately become argumentative and start attacking whoever you need to talk to. No, the thing you're fighting is your own tendency to be complacent. You're throwing those punches at the ennui that would keep you staying in the same place forever. Luckily you have a fantastic celestial coach in your corner backing you up. That coach is Neptune, sitting comfortably in your house watching over every move you make. Whenever you've got a fight you need to wage (especially when it's against the baser aspects of yourself), you need to remember that Neptune is there, towel around his neck, cheering you on and ready to help you train for what you need.

Your workplace is no doubt filled with many people you'd like to fight, but again you'll want to remember that the main person you have to do battle with is you, who made up of all your bad habits. Take a close look at how you are at your job and see what you think of that person. Odds are good it's a little bit of a good stuff mixed in with a little bit of bad stuff. You're going to want to treat that bad stuff like your opponent, swinging your fists to get them knocked out. The part of you that's good stuff on the job needs to be nourished and noticed. What could you do to get that part of you a bit more attention? Sometime around the 11th, you'll want to set up a meeting with a superior to talk about your performance. This is the time for you to clearly see how you're doing and what you need to improve about yourself. But maybe, more importantly, you need to listen and not dismiss any praise that comes your way. Internalize all of it, make a plan to fight the stuff that needs work, and embrace the stuff that's good. You could use a bit of self-praise time, Aries. This is your start at it.

After starting the month with a rough confrontation, the rest of January should be the time for embracing the people in your life for who they are, faults and all. This doesn't mean you shouldn't speak up if someone is royally screwing up their life, but for the most part, you're going to live and let live with the people around you. Meet with family or close friends around the 18th. You might need to set up the event yourself. Maybe a nice dinner out a restaurant you've been curious about? Whatever works to pull people together. You're doing this to let the people in your life just be вЂ¦. Them. They need a little air time doing this and you're going to provide it.

Jupiter gave you a lot to deal with and now Neptune is here to help heal some of those wounds. It's like he set up a warm bath for you to let your muscles relax in, knowing that you've fought the fight of your life. Let Neptune do that, Aries, and know that you won't rest for long. You're a born fighter and you won't settle for anything less than.