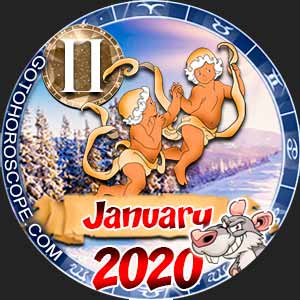 If ever there was a time in recent memory when you'd be doubting yourself, Gemini, January of 2020 would be it. This is not to say that you should be doubting yourself, but any and every anxiety in your brain is going to be tugging on your sleeve during this month and it's going to make you question everything. There's nothing that can be done about those nagging voices, unfortunately. What you can control, however, is how you respond to them. If you come to expect the voice of doubt to be speaking in your ear all the time, you'll know enough to not always listen to him/her. And that voice shouldn't stop you from taking some chances and sticking your neck out. You don't have to go crazy with the risk-taking in January, but you should do a bit of it.

Why what do you know? That first week of January is the perfect time for you to stick your neck out and do a small bit of risk-taking. No need to go bungee jumping or anything like that. But odds are good there's something you've been a little afraid to do that you need to do in your life. Is there someone you need to have a confrontation with? A medical appointment you've been putting off? The scale of risk does not need to be that huge in the eyes of anyone else. It just needs to be something you should do that you find yourself not doing. Get that in before the 7th and you'll be on solid footing for the first quarter of the year.

This is an interesting time for you financially, Gemini. January is shaping up to be a great time for you to make a large purchase that you've been considering. Well, let's clarify that a bit. Maybe you've been eyeing a new Tesla for a while, but we're not talking about a dream purchase well out of your reach or anything like that. There's probably something with your home, or a car repair, or something that's going to make your day to day life that much easier that you've been thinking about for a while. If you're going to pull the trigger on it, do it in the second week in January. If you don't have the money, for heaven's sake don't overextend yourself to get it, but you've most likely been saving for this for a while. This is the time. Go ahead and take the plunge and enjoy yourself.

Romantically and social is also the perfect arena for you to take a few chances. This month is great for you to go out and meet people, or get to know people that you've had your eyes on for a while. There's probably a networking event that you've been putting off for a while, whether through your workplace or just something that's been showing up on your Facebook feed for a while. This is the month where you need to screw your courage and actually go to it. This doesn't have to be any crazy romantic comedy scenario and you're not proposing marriage to anyone. You just need to stick your neck out and make the first connection with someone: be the person who approaches first and says "hello". That's it. That's the extent of the risk-taking you'll have to do. If they say no or brush you off, so be it. You'll have taken your chance and you should bask in the glow of the confidence that brings with it.

Pluto is going to be giving you some encouraging signs this month, particularly on the 17th and the 22nd. Positive events are going to present themselves on those dates, but you'll need to keep your eyes open for them. These could take the form of something small like finding a dollar on the ground, or they could be when you're introduced to people or forces that are going to change your life forever. Sounds heavy, right? Don't worry: it's all soaking in positivity and benevolence. What's important is that you keep your eyes and ears open on those days and be open to anything (or anyone) that presents itself.