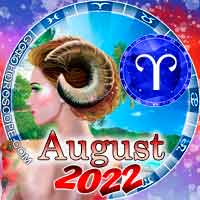 August is a month of many shifts for Aries. This month Jupiter will officially start his retrograde phase in your own sign, and Mars, who's said to be the steersman- or the planet responsible for- Aries is also taking his first steps in the sign of his retrograde later in 2022. And with that in mind, you better get ready for retrogrades to be the central theme for the rest of your year.

Sounds daunting, doesn't it? Well, it doesn't have to be.

Before we go into the actual transits, you should look forward to this month. I think it might be helpful for you to have a short one-paragraph crash course on retrogrades so you can plan the rest of your year accordingly.

Though on social media, you'll often see retrogrades being used as a synonym for destructive, chaotic or any other canned astrology metaphor... Bad is actually not quite the word to describe it. Retrogrades simply mean slow! Especially with Mars entering your 3rd house later on the 20th of August, what this really means is that for the next few months, you're deep-diving into 3rd house topics, and even things that seem totally unrelated to it will feel like they feedback right into the 3rd house. Usually, this would be a simple 2 month period that comes and goes rather quickly without the retrograde. So it's almost as though a thing you're used to being momentary suddenly has exclamation points all over it.

Now, you're probably asking, what are 3rd house topics?

This house is perhaps the most mundane of all of the places. It's where you find the activities and people you see every day, almost as though it's part of a ritual protocol. Here we find neighbours, your siblings, acquaintances and not your best friend, but the next best option.

Knowing that Mars will be there for the next 6 months in a hyper vocal sign, you can get ready for disputes, arguments, disagreements and all of those heated conversations to become part of your everyday life. And even if this might not be the sea of roses everyone wishes for, this can point to a time of speedy learning. This is because the more we have our ideas challenged, the more developed they become.

Now, there's, of course, the chance that this is less about learning and more about severing bonds with some of the characters listed earlier. Those of you born during the day and who are 26, 38, 50 or 62 will fall more on the challenging side of this transit, so take the time to breathe whenever you need. If anyone starts to grind your gears, it's best to write your thoughts down first before you confront them, as things can escalate rather quickly with this transit. Either way, the 20th of August is just the first step of a 6-month chapter, so you'll have plenty of time to get acclimated with those energies.

Backtracking a little bit, we have the month's Full Moon happening in your 11th house of friends. This keeps up with some of the trends from the 3rd house but in a far less mundane way. If the third house is your almost-best friend, the 11th is your ride or die.

The good thing about the 11th house and having a lunation fall under it is that this is one of the most positive houses in the chart. It speaks of your hopes, aspirations and even random luck. This Full Moon happening on the 11th of August is a rather challenging one on a global level, but you actually get to benefit from having it happening in your 11th house. Saturn is a strong player here, so we can expect a certain degree of getting denied something you were hoping for, especially if you were born at night. The silver lining is that this hope likely was never guaranteed in the first place, so even if the first blow might sting, you'll soon forget that this was even a thing. In a way, this lunation is a lesson on releasing expectations and being content with the present.

However, in your 6th house, the New Moon is a lot more different.

This New Moon happens on the 27th of August, shortly after Mars made his ingress into your 3rd house. This matters because it means that Mars will be dominant in relation to the New Moon. Traditionally, this condition gives Mars full ability to do as it pleases with the Moon. In your case, this could target your home, children, creative pursuits or any competitive games you might play. It will be pivotal that you remain calm and measure your words before venting at someone during this time. Because Mars is the ruler of your sign and is also the one "dominanting" the situation, it can mean that your very actions can be the trigger for some kind of misfortune related to your living situation and your family. In other words, this is not the time to confront anyone. A better way to let that energy flow and not fight against it would be to practice physically demanding activities that require a certain level of dexterity. Things like yoga, tennis, or even violent video games (despite the lack of physicality) can be a helpful way to channel your inner Mars.

August is your month to take a chill-pill Aries. Things will keep popping up to test your patience, but you mustn't let them get to you. Take a deep breath and relax. You don't have to win every fight.