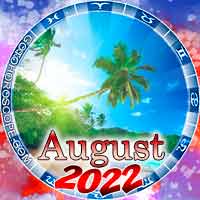 Or read general August 2022 Horoscope for a month ahead

And here we are in August. This month is one of those months Astrologers were all at the edge of their seats in anticipation. This is because the month starts big and continues to expand, initiating a journey that's likely to last all the way to 2023. Up until this point, we've had most of the significant transits of 2022 happen already, so some of us might've settled into what feels like stability, but before we get too excited, there's one last shake-up before things start to drop.

If you read last months' horoscope, you already know about the triple conjunction of Mars, Uranus and the North Node that slowly intensified as the month progressed. On the other hand, August starts with such a transit, and fortunately, it doesn't take too long for it to fizzle out. In other words, most of the work was already done in July. It's all about dealing with the aftermath of it all. I tried to save for this month's forecast what such transit could actually bring in the global sphere.

The North Node's transit through Taurus has played a significant role in both the economic crisis and advancements of 2022. Taurus itself is the sign related to money, finances and all the basic needs for life to sustain itself. Since the currency is our paramount form of exchange in modern times, it's not very surprising to see what has unfolded since earlier in March of this year. Mars being added into this picture pushes the volatility of our current assets to an extreme. This transit is all about pushing for institutional financial change and overcoming stagnancy. There's a good chance this won't be an easy process since Mars is said to be exiled or unfamiliar with Taurus' natural inclinations. Still, as I said earlier, this transit has been building up for most of last month already, so August will merely be the culmination of these events. Because Uranus, the planet of technology and innovation, is a major player in this transit, Cryptocurrency or Blockchain will likely be essential terms you'll need to get accustomed to after this transit-if you haven't already.

If you thought that's all Mars is up to this month, you better hold your horses because this planet will continue to be busy in the sky for quite a little while.

After Mars steadily separates from Uranus and the North Node, the red planet will arrive in Gemini as soon as the 20th of August. Usually, a planetary ingress like this wouldn't be a significant reason for speculation. Still, considering the story we're currently watching and telling, I think it's worth giving this placement a bit more thought than we usually would. Especially since later on the 29th of October, Mars will station retrograde in Gemini, where he will stay all the way to March of 2023. So from now on, it's 6 months of Mars in Gemini as opposed to the usual 2 months per sign Mars cycle.

One good way to prepare for this is to pay attention to what new episodes occur in your life as soon as the 20th comes around. Looking at the houses Mars rule and where Gemini is in your chart will give you good hints about what to pay attention to, but the central theme to look for is "difference in opinions."

Mars in Gemini is notoriously argumentative and full of opinions. I personally do have Mars in Gemini myself, and very often, I'm caught in debates and arguments for sport; Mars in Gemini really just likes to stir up some controversy for better or worse. It's really the energy that drives new ideas to be born. Still, if you've had a baby, you know that every birth requires labour. And if we look at where the planet just was in Taurus, the currency wars will likely begin to escalate during the retrograde. The USA's birth chart even has Mars in Gemini as well, making the transit especially important for the country and its residents. Things are about to get shaky, and it will probably take about 6 months for those in charge of counting and sorting our assets to figure out the best way to do things. There will be two clear options, but agreeing on the better one will be the challenge.

The good news is that Mars has a bit of support from Mercury through most of August, who rules Gemini. Mercury is especially in good condition in the sky for most of the month, enabling deep analysis of what those two options might be. And though we may get really close to a conclusion, the second Mars actually goes retrograde in October. We will have to revisit that, though and maybe even have a bit of a change of heart. This goes both for the significant world events and your personal ones as well.

With that said, know that August is not the month to make final decisions. Study your field and your options, especially those related to where you store and secure your valuables. And please do note that, sometimes, what is comfortable and known might not be the best option. Who's ready for a change?