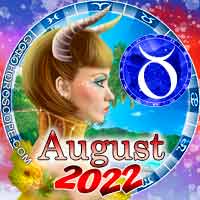 I'm sure you don't need me to tell you this, but the last month was a pretty hectic time for Taurus. Especially if you're reading this horoscope because you have a Taurus ascendant, Mars would've been transiting through the most sensitive spot in your whole chart. This transit can bring anything from fevers to rashes and cuts, but the good news is, it's almost over... sorta.

Taurus' Mars transit officially ends in August, but not until the 20th of the month. Still, once he does, the red planet will enter the sign of his retrograde cycle, where he'll stay for the next 6 months. Since this is your 2nd house, money, resources, and self-worth will be topics to be on the lookout for the months to come. But this is not the whole point of this horoscope. Especially after having a month packed with Martial energy, the big question here is: How do you learn to not fear the God of War? And even better, how can you become his friend?

This lesson will be one that requires a tremendous amount of time and effort. But the good thing is that through these 20 days of still having Mars in your 1st house, the planet will be as close to you as it can get, meaning that if you want to understand that side of your life, you just have to call him out. And I say out because when it comes to Taurus, Mars is more of an external force in your life. You usually find it in your peers and sometimes even in your dreams and transcendental experiences. It could even be that during this time, you have captivating dreams about warriors, fights, hunting or even dreams of the sexy kind. So, next time someone yells at you or when you have a "nightmare" about beasts and bloody swords, try not to pull back and run away from it. Look within and see how that's a part of you that could be missing and try to think about how you could implement it. You have the whole month to figure that out! You'll even have some help during the New Moon, but before we get to that one, let's first take a look at the Full Moon.

August's Full Moon happens on the 11th of the month and in your 10th house of activity, reputation and career.

Without sugar coating it, this is not necessarily the biggest harvest Full Moon. Though it's common to see posts on the internet talking about how a Full Moon is a time to reap the benefits of your manifestations, that's hardly true. Otherwise, we'd see new millionaires every time the Moon looks big and bright outside. For Taurus, this month is one of those where the Full Moon is less about manifestation and more about culmination.

At this time, you're facing a trial that will put your sense of gravitas to the test. This is all about standing up for what you believe in and not bending just because others disagree. This is an especially pivotal transit for those who are 21, 33, 45, 57 or 69. Although if you were born during the day, you're more likely to be praised for your defiance and self-certainty. The nocturnal babies, on the other hand, are more likely to face backlash. Still, neither are necessarily good or bad. The people getting rewarded could be receiving such treatment for the wrong reasons, and those who are receiving pushback might get pushed toward an even better direction. The only thing this means is that you'll have to be on your toes and pay attention to how the public reacts to you. You can be sure that your moves will be carefully scrutinized. What you do with that is up to you!

Now, back to the New Moon of the 27th of August.

Why did I say the New Moon will lend you a helping hand with understanding Mars?

Well, this is because Mars will be "Dominanting" the Lunation. This means that as the Sun rises, Mars will be strictly at the top of the sky overseeing the day's inception. It's in control of what happens within the day.

Now, if you remember something we covered earlier, Mars is more likely to be found in people in your life or in the less tangible spaces of your waking life. Because this Lunation is happening within the constraints of your 5th house, it can mean that your partners or adversaries will be in control of your creative ideas and pursuits. And the reason why this is such a great lesson on "How to Mars" is that the only way to get back in control is through exerting some level of aggression. Through these times, you'll be asked to fight for what is yours. If Mars is particularly strong in your chart at the moment, there's even a chance you're in some sort of legal dispute for the custody of a product or even your child if you have one. If that's the case, Mars is inviting you to be fierce, or even better, to ally yourself with people who can counter-balance these skills that might not come as naturally to you. If you have that one friend who will get into a fight for you, now is the time to call them.

August is a bit of a stressful month for Taurus and everyone else. Yet, stress can be a hell of a friend when you need to get things done, and if Mars is running the show, you know that's the end goal. So don't be shy. Go out there and get what you want!