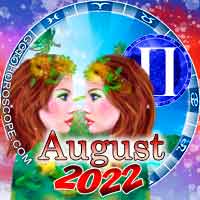 Geminis born during the day get the best transits out of the two Mercury-ruled signs this year. This is because Jupiter- your luckiest planet- will be able to support your Sun or Ascendant throughout the whole year. And even though, by the time you read this horoscope, Jupiter will already be retrograde, that just means that the biggest planet on our solar system is getting ready to revisit your 10th house of career, bringing further expansion to your actions and popularity.

Now, that won't really happen until October, so why would August continue the upward trend?

Jupiter things aside, Mercury is also rather powerful this month. And the good thing about Mercury is that it is a neutral planet. So whether you were born during the day or the night, having your steersperson-as they'd be called in antiquity- in good condition means that you too are on a "game on" sorta mood.

As soon as the 4th of August comes around, Mercury will enter your 4th house of foundations, completions and home-life. This means that for most of the month, you'll be fully supported to close any chapters that need to be completed in your life, as well as have the comfort to sit back and relax.

With that being said, Mercury in your 4th house is not necessarily restful. After all, this is the fastest planet in our solar system, so when Mercury is feeling good, they mean business. Since this is happening within the context of your house of domestic life, you're likely to spend a lot of your time creating comfort instead of enjoying it. This is the month for you to get organized and set yourself up for success. The leisure will come later. Another way this transit can manifest is also through your relationship with your father or fatherly figures. Generally, Mercury is said to be the defector significator of friendships, so August also holds the potential of getting closer and friendlier to any fatherly figure in your life.

Now, despite the month being full of good news, you still have to prepare yourself for something, especially since this is a month that will last for almost half a year.

This is, of course, Mars' ingress into your 1st house on the 20th of August.

The reason why Mars is staying in your 1st house for so long as opposed to its regular 2-month-ish stay is that he eventually will retrograde in Gemini by the end of the year. So even if the retrograde is not officially happening this month, you might want to stay alert to things that might arise from the 20th onwards. Because this is your 1st house, things like fevers, irritations or swelling of your hands and fingers can be a thing to be wary of, especially if you're already naturally prone to these sorts of ailments or if you have Mars in Gemini. Gemini is also responsible for the respiratory system, so you might want to go to a preemptive visit to the doctors. Though, the physical manifestations of this transit are more likely to be experienced by those of you born during the day. For those who are nocturnal natives, this is more likely to show up as an inner quest to sort out repressed anger or even have a significant venting session with a friend or employee that might need to hear a couple of words from you.

You have the time to prepare, so take this chance!

The lunations of the month are also rather interesting for you.

The Full Moon in your 3rd house promises to highlight some limitations involving your adventurous spirit. At this time, you may realize why that trip you were planning won't come to fruition, or for those who are in school, you could also get signs from the Universe that maybe what you're trying to study is not entirely for you. Those born during the night could be more prone to resisting these limitations, but my advice would be to relax into it and look for alternate options. Because this Moon is ruled by Saturn, the implications of this transit are likely long-term, so don't feel like you need to have it all figured out. Accept that you don't know what to do, and the answer will come eventually-though probably around February of next year.

The New Moon is much more pleasant, however. This is because it happens in your 4th house, where your sign ruler is exalted. Unfortunately, they will have moved away from that house right on the day of the New Moon, but that doesn't prevent you from still making the best out of this situation. The lunation could almost act as the grand finale to your Mercury in the 4th house transit. Take this time to enjoy the fruits of your labour. Mars will already be in your 1st house by then, which can make you somewhat overly action-focused, so it's essential to take a seat back and appreciate the work you've done so far. That doesn't mean you have to stop doing everything you're doing, but a moment of gratitude goes a long way.

August is a bit of a mixed bag, but for a Gemini-a mutable sign- that feels like home. Good luck, Gemini!