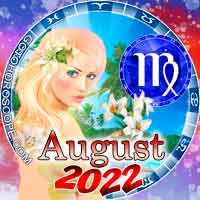 Alright, Virgo! Get your seatbelt on because August is a bit of a wild ride.

By now, most of you have probably heard about the triple Mars-North Node- Uranus conjunction that happens right on the first day of the month. While the whole world was likely running in circles and going crazy, Virgos, on the other hand, might've benefitted from such chaotic times. While that doesn't mean that the transit is accessible, it likely was more of mayhem with very positive side effects, especially if you were born during the night.

This is further emphasized by the fact that Mercury will enter your own sign shortly after, where they're actually said to be exalted. Having that configuration in your 1st house means that not only do you benefit from the disruptions of the early month, but you also have the mental bandwidth to digest and alchemize it into something way better than expected. Since all of this is happening within the context of your 9th and 1st house, the transits could be symbolizing that abandoning an old idea suddenly and going on an adventure shows you great opportunities to reinvent yourself and your career.

Now, this transit is not all just good vibes. This is because despite the influx of good fortune, by the time we get to the 20th of Augustthe 20th of August, Mars will go from a supportive position in your chart to one that can be quite troublesome for those born during the day. The nocturnal natives could also experience some of the funkier manifestations of this transit, but it's undoubtedly much milder.

The Mars ingress is an important one this time around because your 10th house is where the planet will stay for the next six months, meaning that after having that friendly support to dive deep into your new career adventure, you'll have to deal with some of the consequences of making that decision. This doesn't mean that taking that leap of faith wasn't a good idea, but every action comes with a re-action, and in your case, that's Mars. The red planet in that particular house and sign can cause heated arguments or language barriers, so one thing to keep in mind is that you might want to be a lot more thorough with your thought processes before bringing anything up. Think of this as a Mercury Retrograde with extra spice. Misunderstandings can and will happen, but now there's also the possibility for bridges to be burned and curses to be tossed around like they're abundantly accessible. Still, know this is a 6-month long chapter you're just entering. So take this time to prepare yourself, instead of worrying about it. A question to meditate on is: How do people perceive me when I'm angry? And if you're never mad, what happens when the time comes when you actually are?

Now let's move on from Mars for a second. There's much more to this month than a mere ingress. The Full Moon is one of them.

This month the Full Moon is happening in your 6th house. This is the place of health, hard work and the routine tasks you have to do but would rather not.

Having the lunation fall in this house while also under the influence of Saturn on the 11th of Augustthe 11th of August can be a bit stifling. Especially after such a freeing transit like the one on the 1st of Augustthe 1st of August, you may feel averse to tending some heavy responsibilities. It can be almost as though you fled from something to feel free, but you find the same issue at the new place you arrived. This means, then, that the problem is not about location but your willingness to do the dirty work. So take this time to come face to face with what you feel limits you because as unfortunate as it may seem, limitations will always be there. So through this lunation, you'll have to learn how to make the things you dread doing a part of your routine to the point you don't even have to think about them anymore.

And looking at the New Moon, doing so will definitely be rewarded. This is because we have the New Moon happening in your very 1st house, initiating a chapter of refreshing your sense of self and how you show up for the world. However, because this Full Moon happens on the 27th of Augustthe 27th of August, Mars will already be in your 10th house, forming a square to it. This can mean that your "new-you" will require a whole lot of blood, sweat, and tears to be fully realized. It's even enjoyable to think that by the time Mars is out of your 10th house, you'll be super close to the Full Moon in your 1st house, showing how taming your wilder side will take time, but once it's integrated, you will be stronger than ever. Get your warrior suit on, Virgo.

That's it for August! This is a month initiating a bit of a difficult journey for you, but it does so while giving you all the tools you need to survive. If your life were a superhero movie, this would be the scene where you get your superpowers, but you realize that now you have what it takes to fight the big baddie. The fight won't be easy, but the glory will be grand.

Who said Virgos are only meant for the supporting role? This is your time to prove them wrong.