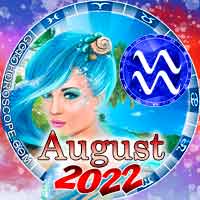 Hi Aquarius, let's look at what the heavenly spheres have in store for you... Beginning of July, Venus and Jupiter had you feeling extra creative and social. By the end of the month, Mars and the Sun with his posse (Venus and Mercury) made you look at the balance between your work and home life.

This month there's a focus on boundaries in your relationships initiated by the Sun and Mercury opposing that Saturn still in your Ascendant. You also see themes of YOUR and OTHER people's money with Mercury and the Sun transiting your 8th house and Jupiter retrograde ruling your 2nd house. This is important for your finances because both of these houses are linked to money and resources.

Jupiter, the captive. We know Jupiter as the planet of abundance and that he is! Most importantly, he represents income for you because he rules your 2nd house of income, material goods and values. With this in mind, I have good and bad news for you. The bad news is he will be retrograding from the 28th of July until the 23rd of November.

The good news is-retrogrades are not as scary as what pop astrology makes them seem! So what is a retrograde? Astronomically, it looks like the planets slow down, pauses and then start going backward. This is important because Astrology is all about the apparent movement of the stars.

What does a retrograde mean? My favourite story about retrograde periods is Innana's descent. The Akkadians loved weaving stories together with the patterns of the planets to explain their motion. In the descent, Inanna or Venus is held captive and is stripped of her powers when she descends into hell; love, lust, childbirth & all the Venus things pause and seem meaningless while she's away. Apply that concept to Jupiter and we get a picture of Jupiter behind bars and therefore not really able to work his magic. What this means for you is that income, alliances, friendships and social groups seem to slow down. Jupiter transiting your 3rd house can't fully support you so travel mishaps and miscommunication with your besties might be more common than not during this period. You might even get the feeling that these topics are going through a somewhat reversal, as you've just experienced a nice boost while Jupiter transited directly in your 2nd house.

I really want to nail in the point that you do not have to be scared of retrogrades, okay? So, have no fear that's why astrology is here.

Alright. Let's look at the rest of the month.

Me against the world! Okay, child of Saturn, I know it's been rough lately; by lately I mean the last five years and for that, I am truly sorry. Saturn hit your 12th house right before hitting his return smack dab in your first house! Pair that with the worldwide pandemic, and I'm sure the Saturnian "rejection and exclusion" themes have been normalized-A little too normalized for your taste. Even if you don't dare say it.

As the significations of Saturn are all about rejection and exclusion, that first house transits will hit differently.

If you were born during the day, this might actually be a constructive moon. It could be that through the eyes of others you realize something about yourself- your strength, resilience, boundaries or how much you've grown.

If you are a night baby, this might be a little more uncomfortable. For you, this Full Moon could highlight the negative aspects of your relationships, making you reconsider a thing or two in a more uncomfortable way than I would care to admit. However! Venus which is your greater benefic will be opposing Saturn and supporting the Sun, Mercury and Mars all the way until September 4th. This will be the perfect opportunity to smooth things over with yourself. yes with YOU because you also need to show YOU love and any loved ones that need some extra TLC.

The New moon. On the 26th of August, the moon will be rebirthing from under the Sun transiting your 8th house. This will be a preview of the transits you'll experience through September. Pay attention to both the comfortable and uncomfortable things happening, especially as they relate to communication and money schmoney honey. Mercury will soon be retrograde in that same house, and it would be very helpful to know what topics he'll be slowing down the most for you.

This is a time to hear, connect, and understand others. As a child of Saturn, it might feel a little overwhelming for as much as Saturn needs support from other planets he doesn't like to admit it.

My advice? Use the lessons you've been learning from him since it's ingress into your 12th house. Take some time for yourself when you're overwhelmed, do something for yourself. Get some serotonin flowing with any activity that connects your body to your mind and lets any uncomfortable energy out in a constructive way. But most of all, let yourself be helped. It's smart to rely on yourself, but it is wise to seek, find and rely on others when you need to.

And good news, this is the last stretch before Saturn leaves your ascendant. You're almost there! Push just a bit longer!