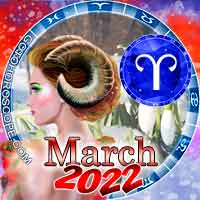 March is really when the year starts, Aries. Right out of the gate, we have a New Moon happening in your 12th house. This marks a significant positive start as Jupiter, the most blessing of all the planets, oversees this new Lunar Cycle.

Without a doubt, the 12th house can be one of the more tricky houses to navigate, considering it deals with dark subjects like loneliness, sadness and self-undoing. However, Jupiter transiting through that house and ruling this New Moon could make it much easier for you to find the silver lining of your current situation. This is also the planet of spirituality and wisdom we're talking about, so while you may still feel the need to live under a rock with your own melancholy, you may also uncover deeper philosophical aspects of your identity you haven't had much access to previously. It's also important to note that this lunation will be in a positive and unifying sextile with Uranus, the planet of authenticity and abrupt revelations that's transiting through your 2nd house. This could indicate that your discoveries this month can turn into something profitable. Though profit here may not necessarily be speaking of money directly. This could come as gifts or new tangible tools you can use to heal yourself physically and mentally.

Shortly after the New Moon, both Mars and Venus will arrive at Aries' 11th house together. This is the place where Saturn has been transiting through for almost the last 2 years. This transit can be pretty significant, especially for those of you who are around 28 to 30 years old.

This transit can make things a bit tumultuous and somewhat bittersweet. The 11th place is where you find your alliances, hopes and dreams. Traditionally it's thought of as one of the most auspicious houses, which could mean that the Saturn, Venus and Mars trio will be strongly linked to your aspirations this month. A good hint of how this transit will affect you would be to think back about what happened in February of 2021. This was when Venus and Saturn were transiting through that same house together, indicating that you might revisit some business partnerships from around that time. While it may not necessarily be the same people you interact with, it will most likely be a similar theme. The big difference here is that Mars wasn't in this house last year, so his presence will add extra heat to the events unfolding this month. This could be the last push you need to advance in your endeavours, especially if you were born at night. Though the martial heat can be a little more overwhelming for those born during the day, causing separations and debates. Given this is a cheerful house, whatever happens, will yield a subjectively positive outcome, though the way you get there may be a little tense.

On the 18th, we have the Full Moon of the month happening in your 6th house. This is the place that deals with work and making ends meet. It will be opposing Mercury in your 12th house, which points to a need to reflect on what work-related activities do and don't make you happy. This transit is especially significant for those unhappy with their work situation or feel like it's about for a raise. The Mercury opposition can make things a little foggy, and it may be a little hard to see the way out of these types of situations. The trick to get through it will be not to think in such a linear and rational fashion. When Mercury is in your 12th house, the central theme is abstraction and creativity. While this may not be necessarily the time to make a big, bold (and uncalculated) move, using this mental fog to your advantage by jotting some weird ideas down in your journal. Don't feel pressured to do anything just yet. Write anything that comes to mind and get back to it in a month or two when your head is clearer. Life is not just about productivity.

The month ends with a few conjunctions happening in a couple different houses in your chart. The first one is Jupiter and Mercury's happening in the 12th house. This occurs on the 20th, and it would be a perfect time to detach yourself from materialism. Taking the day to relax and maybe meditate without pushing yourself to be or do anything grandiose is highly recommended. The second conjunction is that of Saturn and Venus in your 11th house of friends and alliances, happening just a few days after on the 28th. This second conjunction could help manifest a sense of stable union with your friends and significant others. This stability could be just what you need to allow yourself to surrender and enjoy life without any expectations. Lean on the shoulders of those you love, and take it easy. March is the month to give yourself a break.