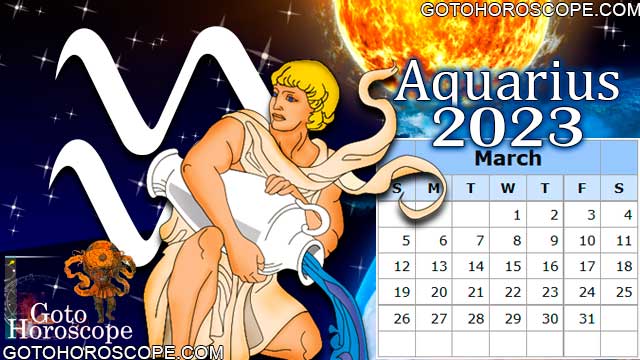 Disorderly and weird activity in March 2023 will become the main problem for representatives of the sign Aquarius. The thing is that your zodiac sign will make too much effort to implement their plans. It is possible that it will be more than needed for implementation, but still, that will be just enough to ruin it. As a result, getting what you want will take the form of a destructive process. For example, in order to pick an apple, representatives of Aquarius will cut down the whole tree on which it grows. The right policy in March 2023 may require a tough calculation of the force and place of its application. Simply put, the goal should have the optimal tools to achieve it. Before acting, Aquarians should estimate how much money, time, and labor they will actually need to get exactly what they need and nothing else. not a single extra calorie, not a single move, or anything. True, there will always be a danger of getting carried away and spending more than planned, but everything will depend on the Aquarians themselves. As for outside help, it will be needed. But if you resort to it, representatives of your sign should focus not on long-term cooperation but on a one-time action. If there is euphoria surrounding the newly formed team, it is most likely self-deception. The partnership will break up as quickly as it was assembled, immediately after the completion of the project, and possibly in the process, as soon as there is no need for someone's participation.

In order for March 2023 to be fruitful, Aquarians need to decide what they want to get or accomplish this month, specify the task and the expected result. This instantly disciplines and makes the process of achieving the goal easier. In addition, the Aquarians themselves will be surprised at how little time it took for the plans to come to life. If you neglect these conditions, you will have to stand still for the whole month and be angry at the whole world at the same time.