Marriage Compatibility Quote: Better as a second or third marriage.

Exactly. Two Taurus Moons are drawn to each other's peace. They will indulge in the same simple pleasures in life and expect nothing of the other. They can sit on the sofa and watch television for hours, watching episodes of the same show over and over again, eating the same snacks, until they die. While there is peace, there is no inertia, no motivation. Taurus Moon is slow to motivate and slow to react. While they may be very comfortable with one another, neither takes the initiative to make necessary or even welcome changes.

In their younger years, the stubborn and unyielding Taurus Moons need someone to motivate them into action. They will work tirelessly at the same thing, slow and steady, in order to obtain personal and financial security. They will work hard. They may not do something daring, like start a company or gamble on horses, but they will focus on making a peaceful life. And neither moon is particularly motivating in its younger years. These younger moons are more interested in establishing their own stability and security, and that means eschewing adventure or helping others.

But, as this Moon ages, it not only opens up more to variety, but in general seeks to settle down and enjoy the quiet life as one does when they're older. This is actually a good match for both of them in later years, as they are very much seeking a second or third marriage where romance and excitement give way to companionship and financial stability. When this moon ages, it is ready to start showing more of its time and resources with another person.

Growing Old Together Compatibility Quote: If they meet later in life, absolutely.

A Taurus Moon is a hard worker, but it will work to obtain stability. It doesn't do foolish or crazy things, like bungee jumping, or going to raves and taking mystery pills. A younger Taurus Moon may long for a partner to pull them out of their comfort zone just for a little bit, but an older one is less self-conscious about its desire for peace and quiet.

And this is where they come to appreciate each other more. This Moon feels loved when it is nourished with the simple things it trusts, like familiar (albeit bland) foods, a warm house, a cozy bed, spending cash, good sex, and the remote control to the television.

Sex Life Compatibility Quote: You'd be surprised. They're not, but everyone else is.

These two have consistently good sex. Once Taurus Moon is revved up, it can go all night. It needs the perfect ambience: a nice bed with fresh-smelling sheets, soft music, a nice drink, and sexy lingerie are needed because Taurus Moon wants to fill up all the senses. Taurus is the most sensual sign of the zodiac. It enjoys sex for what it is, and having sex makes it feel secure. Taurus Moon cuddles in bed when in love (and watches television).

Physical attraction is very important. In fact, you know when Taurus Moon is looking for a love partner because they look fabulous. They start to let themselves go when they fall in love. Deep down, they like having more to cuddle at night. And two overweight and out-of-shape Taurus Moons will make the cold nights warmer, even if no one wants picture this in their minds. They know what the other wants and will give it to them without fail. There are no surprises in bed; they rely on this.

Taurus Taurus How to Make it Work Compatibility Horoscope

Make it Work Compatibility Quote: Add a little spice to the recipe.

There should be other astrological factors to help the partners motivate each other, like aspects between personal planets and the Sun or Mars. Otherwise, these two will quite easily fall into a comfortable rut. Taurus Moon falls into a rut very easily, and two of them can create a super rut. This is the kind of couple are found in their house dead, under an avalanche of old newspapers.

They should make it a personal goal to acquire experiences. This way, they get out of their comfort zones and stop being too familiar to each other. The danger here is that they could become more like roommates who shop and eat together if they don't challenge each other every once in a while. 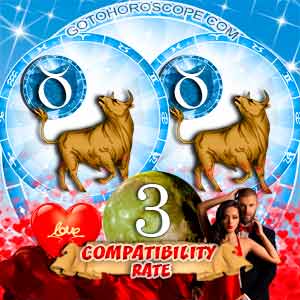 Sun sign compatibility will get you so far. Sure, you get along well, but will they motivate you to be a better person? If you want to know if you are happy with Taurus Moon's life at a slow pace, you must know if your Moon sign is compatible with this moon sign. To determine if your Moon is in Taurus, put your birth date and birth time in our Natal Chart Calculator and do the same for your partner.