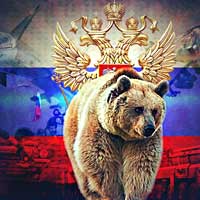 Mundane astrology is the term used for casting charts for countries, or as it was traditionally done, for the leader of the country as representative of the â€˜nation'. Since the French Revolution and the birth of modern nationalism, we now look at the birth-time not of the king, but of the nation itself. The Sun (king or leader) is in the sign of Capricorn in the 6th house in Russia's chart, which describes in mundane astrology the military and government bureaucracy, in service to the people in the 6th house.

The Moon (the people, the masses) are in the 2nd house, the house of money and finance. Clearly, in the Russian Federation, the state bureaucracy should serve the people and create wealth for them. The Ascendant, which is the personality of the country, is in the fiery sign of Leo. This Russia, like the two before it, wants to be a leader in the world.

In 2008, the planet Pluto entered into the sign of Capricorn and while it has often been commented how this coincided with the 2008 financial meltdown, this also had a major effect on Russia as Pluto approached Russia's Sun, Uranus and Neptune, all in Capricorn. In August of 2008 the Russo â€“ Georgian war broke-out, the first European war of the 21st century but not the last in which Russia would be involved. In 2009 Sergei Magnitsky, a lawyer for Hermitage Capital, died in a Russian prison, setting off a protracted battle between the Russian government and the international banksters. Both of these events fundamentally changed the relationship between the Russian Federation and the West, and both occurred as Pluto was applying (getting closer to) Russia's Sun at three degrees of Capricorn.

Before Pluto's entry into Capricorn, it seemed that Russia was proceeding along a path of integration with the West, but by the time Pluto had conjoined the Russian Sun and began separating from it, everything had changed. When Russia annexed Crimea on March 17, 2014, Pluto was at 13 degrees Capricorn, an exact conjunction with it's natal Uranus, also at 13 degrees Capricorn. Pluto, the sign of death, power, and force, conjunct the revolutionary Uranus caused a massive uproar in Europe as the new Russia began to assert herself and in 2017 this will certainly continue. It's clear that Russia's destiny is not to be part of the West.

On April 14, 2014 Pluto stationed (stopped) and turned retrograde (when a planets apparent motion from the earth reverses), moving back over Uranus, only to return and makes its final pass in 2015, during which time Russia found itself involved in a civil war in Ukraine and accused of having shot down Malaysian Airlines Flight 17 over Ukraine.

Just as Pluto had turned the international financial system into chaos, it had completely ripped apart the relationship between Russia and the West. The Russian ruble lost half its value, oil prices plummeted and sanctions were imposed on Russia- the cold war had returned with a vengeance just as Russia was celebrating the Sochi Winter Olympics in 2014. This in Pluto in all his fury.

According to the ancient technique of profections, Russia's first house is being activated this year. In mundane astrology, the first house represents the overall state of a nation, its identity and well being. Russia's first house is in Leo, ruled by the Sun. This all ties back into Pluto's transit of Capricorn. Russia's identity and well being, and how they are being served by the Sun (king or ruler), will be severely tested by the Pluto transit. In 2017 the focus will be on Russia's financial status which has been severely strained in recent years.

According to zodiacal releasing, another ancient Hellenistic method recently recovered and found to be quite effective, from the end of 2015 Russia began a period of prominence or what's called a peak period. The last 23 years have been a preparation for this period when Russia will play a prominent role in the world for the next twenty years. It's curious that the year that Russia entered its â€˜peak' period, she began to play a leading role on the world stage, not only in Ukraine but also in Syria, recovering the prominence she had lost in the post Soviet era. 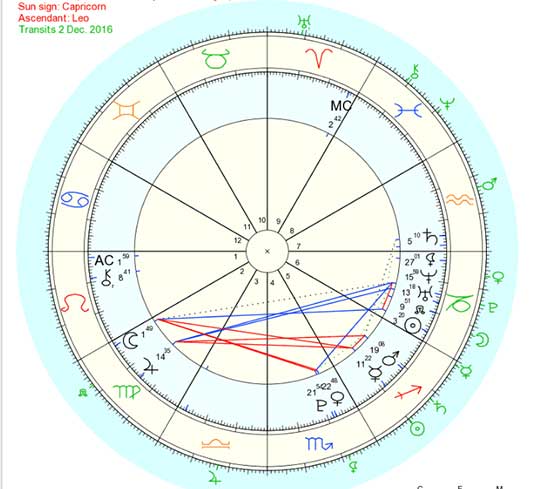 One key date to look out for is December 2, 2016. On this day Pluto will be exactly conjunct Russia's natal Neptune at 15 degrees 58 minutes Capricorn. This conjunction will create a powerful energy to shatter the surreal nationalism gripping the nation and force Russia to re-encounter her soul. There will be no room left for fantasy or fakery. This conjunction is about finding a nations true spiritual significance. The cultural confusion that came from the toppling of two cultural regimes, the Imperial and the Soviet, in less than 100 years will come to a head near or around this date. It probably will not be pleasant and will take time, well into 2017, as Pluto will pass over this point twice, but once it finishes Russia will rediscover her true spiritual and historic path.