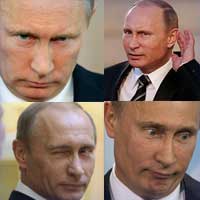 The key is understanding his 12th house, what the ancients referred to as the place of the evil daimon and personal undoing. Putin's Sun is in his 12th house, in fact, he has a 12th house stellium (four or more planets in one sign) in Libra. The 12th house represents things that are hidden, in Latin is referred to as â€˜carcer', or prison. When planets fall in this unfortunate house, they manifest themselves covertly.

It's due to this 12th house stellium that it's so hard to believe that Putin is a Libran. Libra is the sign of balance, equilibrium, diplomacy and good taste yet Putin goads and provokes as if he had a stellium in Aries. This is the mystery of the 12th house and understanding Putin's 12th house is a wonderful way to unlock its mysteries.

Putin's rising sign (where the sun was rising the moment he was born) is in Scorpio. This is his mask to the world, the dark, secretive, intense sign of Scorpio. Putin couldn't have chosen a better career path than the KGB- he was truly destined to be a spy. Part of Putin's success has been his intense loyalty, a very Scorpionic tendency. And while Putin lacks the normal tact and elegance of Libra, his diplomatic skills are an essential part of who he is, they just manifest themselves in an indirect way. 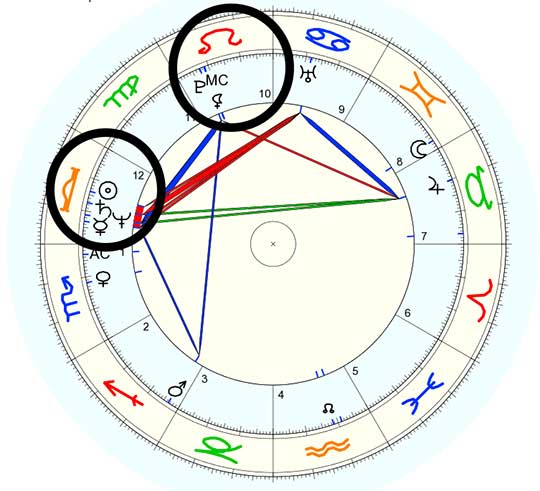 Margret Thatcher was also a Libran with Scorpio rising, and one can see a certain similarity between the two- the need to painstakingly point how â€˜tough' they are. It should be noted that the Sun is in fall in Libra which means the masculine force is uncomfortable, and this often manifests in exaggerated expressions of itself. The two Leos, Barack Obama and Bill Clinton, never feel the need to show the world how manly they are because their Suns are very comfortable and confident at home in Leo.

Another manifestation of his Libra stellium is Putin's devotion to his own cult. Librans love mirrors and are generally vain. The shirtless horseback pictures and tough guy poses are part of his dark, 12th house Libran charm. While in the end Putin might be undone by secret enemies (the 12th house) we should keep in mind that his 12th house Saturn in Libra is very strong.

Saturn is the hard leader, the harsh father, the stern hand and it's in its Joy (an ancient and important concept describing which houses the planets are best suited for). This strong Saturn, which is exalted in Libra and in its Joy gives Putin the ability to lead firmly, if somewhat from behind the scenes. The strong Saturn placement, conjunct the Sun, gives Putin natural authority and a sure, steady, if somewhat paranoid hand, on the tiller of the state.

This 12th house placement also means Putin is someone who needs a lot of time alone. Solitude is crucial for him to charge his batteries and settle his mind. His 12th house Mercury can sometimes make his speech somewhat erratic which can be seen in his penchant for vulgarity and tendency toward long, didactic rants.

So what turned the consummate spy into the leader of the world's largest country? It's clearly his 10th house in Leo, with his Mid Heaven (the highest point in the chart and the indicator of career path and social reputation) in a very close conjunction (less than two degrees) to the dark and powerful Pluto. Pluto is the planet of pure power, death, and obsession and it's married to Putin's Mid Heaven, at the top of his chart in the royal sign of Leo. Leo is the sign of kings and ruled by the Sun, which makes a nice aspect to it, creating a strong connection between Putin the man and Putin the public leader.

This powerful placement gives the somewhat shy Putin a heavy dose of public strength and authority. But this Plutonic placement also makes him an authoritarian and potentially ruthless head of state, though the private Putin is much more a consensus seeker.

Putin's Moon is in Gemini, making him naturally curious and at ease with ideas but not married to any ideology. The second house Mars in Sagittarius would make him driven to accumulate money and property and also quite sophisticated and intelligent in personal money matters. While the man has had incredible political success, his destiny is in the home, not the public sphere, and only when he puts all of his attention there will he find true happiness. (North Node in the 4th house)

The combination of the mysterious 12th house sun, and the powerful and intense 10th house Pluto conjunct his mid-heaven have created the quintessential dark night. Unpredictable, powerful, intense, vain, and forever in the shadows even when he is on center stage. This man has galvanized his country even while causing much suffering for the Russian people as a consequence of his aggressive foreign policy. But maybe Putin understands more about leadership then his Western counterparts?

As George Orwell put it:
Whereas Socialism, and even capitalism in a more grudging way, have said to people I offer you a good time, Hitler has said to them I offer you struggle, danger and death, and as a result a whole nation flings itself at his feet.

Lucho 2018-06-01 23:24:39
-1
You could write a novel, but spill very little facts . Putin is a Libra becoming the balance in Syria, where jihadists were funded by the West, Saudia Arabia, Qatar, and Isis -oil buying Turkey....He put a stop to the Syrian suffering..He didn't fund it!
Dev 2017-03-25 06:07:08
+1
Something is wrong with this page. Only a couple sentences and then the last sentence is cut off. Nothing to click continue etc.
Nikola Tesla 2017-02-13 07:33:30
-2
Of all the people, you are my biggest disappointment. You are supposed to make readings and prediction based on the gifts that the light have bestowed upon you. Yet you make assumptions, presumptions about Putin based on reports from mainstream media like CNN, BBC etc who are controlled by big corporate groups and nationalistic agendas. I am no Russian but I also see the one sided coverage of supposed Russian aggression. Who bombed & destroyed Iraq, Yemen, Libya, Syria etc and isn't NATO trying to surround Russia? And yet Putin is the villain. Kindly make your predictions based on the vibrations that the universe has to offer to you and not based on subjective journalism.