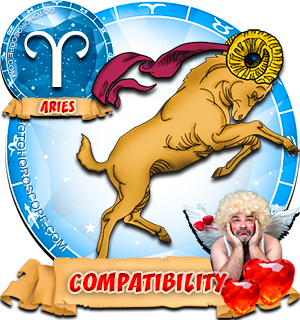 Compatibility Horoscope for Combination of Aries and Aries Zodiac Signs.

The union of two Arians promises to be an exciting attraction for themselves and those around them. Equally enthusiastic and uncontrollable, the two egotists will play tricks in relationships that are worthy of these skillful masters of equilibrium. Union of two Arians is guarded by dual Fire, and the compatibility horoscope predicts a fiery passion for this couple, as well as the warm glow of conflict. The unstable fiery zodiac sign, Aries, has amazing sharpness and vividness of emotion. We can say that emotions control the actions of Aries, and sometimes muddle his head. Aries often acts impulsively, instinctively, blindly, responding only to his emotions, and very rarely - to the voice of reason.

Aries man and Aries woman will experience very strong feelings for each other. They will see a soul mate within each other and rush into their arms, and in doing so, pushing away the crowd of boring and dull pedants who had gathered around. There will be no boring time together: they will talk tirelessly, devoting themselves to each other in their plans, and sharing their dreams. Their emotions will go off-scale, and overflow, sometimes disputes will inevitably arise that can threaten to drag on for a long time on raised voices.

None of them would want to give way on a narrow bridge that spans the river - the zodiac sign Aries is also obstinate and even cocky, and this sometimes will result in notorious consequences.

Aries individuals may make hasty, ill-considered actions. Two Aries in a union, who cannot control their actions, can mess things up and bring a sense of frustration into the relationship with a chosen one. Following the first problems in the relationship, Arians may think that they rushed in choosing a life partner and that the people close to them are not the ones they need.

The newness of feelings and intensity of emotions should be the main medicine during a disturbance in relations between two Arians. Aries of both sexes should maintain the fire of desires and be able to stir up feelings in his/her loved one. If an Aries man has once loved a woman Aries, - he will no longer be able to love any other woman. A marriage between an Aries man and Aries woman can bring happiness to both spouses. This union does not require each of the Arians to sacrifice their principles, limit or infringe upon their dignity and pride, independence and freedom. An Aries individual will find it important to talk together, they will assist each other in a variety of issues. Relationships between two Arians should, however, be based on mutual respect, and follow one golden principle - 'to do a partner as you would like him/her to do to you'.

John 2015-10-24 02:01:18
👍 -6 👎
Message from Greta
I am a Aries woman and was blessed with 14 years of marriage with an Aries man before he passed away suddenly. I never had a dull moment and our love was full passion and humor. Now God has blessed me with a new love and he is also an Aries and I believe a soulmate.