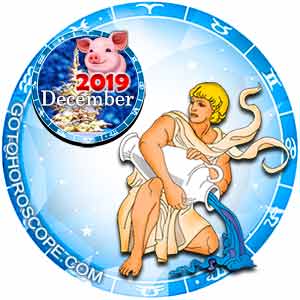 There are a number of interesting surprises in store for you in December, Aquarius. The universe wants to make sure you stay on your toes and don't get too complacent. Lest that sound like the whole month is a minefield, rest easy: it just means that you're going to not want to sleep at the wheel. You see, the universe wants to prepare you for what's coming next year. A lot of challenges will present themselves, so think of December as something like your test run. You're going to run this obstacle course in preparation for doing battle in 2020. That's right: it's your basic training.

The first week of December is going to be like the first week on Parris Island: you're going to hit the ground running and the world is going to feel like a mean, powerful sergeant screaming in your face. This is all a good thing, all part of the process of tearing down the habits you've fallen into and building you up into a bigger, stronger, better version of yourself. That drill sergeant will take many forms in your life: terrible weather, a demanding boss, even an unexpected bill arriving in the mail. Just learn to recognize anything negative as that sergeant getting in your face, trying to make you a stronger person.

By the time the middle of the month comes, you'll be accustomed to the world pushing you like this. You'll have reached the point where the world says ‘jump' and you'll ask ‘how high?'. This is a good state to be in because that means you won't flinch when the universe is pushing you to do better than you are and to go past your current limits. Remember: pain is just weakness leaving the body. And it's leaving you in droves in December, Aquarius.

Financially you'll want to lay low in December. While you have all that boot camp happening in your life, you're not going to have time to be rational about money. Put off any large scale purchases until after the new year. And certainly, hold off on any crazy impulse purchases. However, there is an element of discipline you can bring to your financial world. You're going to want to increase your savings as much as is feasible without leaving you destitute. This might be the perfect time to get a second job or some other sort of side gig. Maybe you can Ebay those toys collecting in the garage, or start that Etsy shop you've been talking about, or start driving for Uber. Whatever form it takes, do as much as you can to keep money coming in and send it straight to your savings account or your retirement. You'll want to keep this up well into January. There are some rainy days on the horizon. But you do have two areas where you can splurge a bit. One, do get holiday present for everyone (if that's your thing) and two, after all that boot camping, you might need a small treat or two. Also: while we'd never recommend that you play the lottery in a million years, were you - hypothetically - to buy a lottery ticket, the best time to do so would most likely be on the 2nd. Purely hypothetically, of course.

December is the time for reflection for most people, and the same is true for you even though you're not most people, Aquarius. You've had a long, hard year capped off by a long, hard December. Around the 28th or so, you're going to want to set aside a personal, quiet day for your reflection. Turn off your phone, get away from your electronics, and find a comfortable place to sit. If you have a working fireplace, by all means, get that fire going. Pour yourself an adult beverage or two. And all you have to do is: sit and reflect. It's been quite a year. Look at who you've become and what you've done. That's a lot, Aquarius. The big question now is: what would you like to do moving ahead? Where would you like to be in 2020? Start asking yourself this and speculate on some answers.