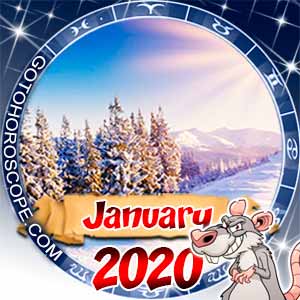 Everyone is ready for the world to end in 2020. If everyone's watching for an apocalypse, will it actually come? And what if it comes in a different form? It might not be storms and locusts but a quiet decay eating us from the inside. Will we recognize it when we see it? And if everything is going to end, what's the point of worrying about the future? And there's the crux of 2020 right there: that worry about the future doesn't do anyone any good. Worrying is a lot like paying interest on a loan you haven't even taken out yet. So while it doesn't pay to worry about the future, it's good to have a vague sense of what's ahead to at least prepare ourselves for what the universe is planning on sending our way.

January is the beginning of a great, new cycle of celestial movements in the universe. It's a bit like a clock suddenly coming back to 12 o clock. While it does signal the end of one era, it is naturally followed by the beginning of a new one. Jupiter will be pulling away from a point of repose in our sky, continuing on for new fantastic voyages in the beginning of the month. And we'll all be here on Earth like the passengers on the docks waving off a cruise ship as it departs. Jupiter's effect will still be felt but in slightly more indirect ways. Meanwhile, Neptune will be appearing in several sign's houses in Jupiter's wake, so don't fear any sort of stellar vacuum. Acting as a sort of a counterbalance to Neptune's power is Mars, circling around the opposite pole in the sky. This is going to have a range of positive effects on a number of people, particularly those under the Earth signs.

Our beloved moon will exert a magical pull on a number of people on Earth, particularly those under Water signs. Look for it to pull away from the forces of Mars early in the month, continuing on its path until at least the spring. More powerfully, the synchronization of Neptune and Pluto are going to create a beautiful nodal cascade on the Fire signs with lingering effects covering everyone.

The skies are going to be active, busy, but more helpful to us on Earth than ever. What it takes for us to harness it is a strong degree of self-awareness and a willingness to keep all of our senses open and ready to receive. Neptune and Mars will resonate strongly with everyone on Earth, highlighting ley lines around the globe. This force is going to be strongest around the 15th, but various flairs will be felt on other dates too. Chaos may reign for a bit, but the strongest will know to keep their collective chins up and press forward.

But will all this activity mean for Earthbound activity? January 1st is always a time of new traditions and reservations - succeeding and failing - and this won't change any time soon. What is different is the power many signs will feel that help support these resolutions, even some they didn't plan to make. Leo and Pisces, in particular, will come out strong, but all the signs have a bit of celestial wind at their backs to give them extra lift. Resolutions require human exertion, but the stars can help keep spiritual lights alive when the human is ready to give up. Everyone should happily allow themselves that leg up.

All of the signs are going to bursting into the year like soldiers landing on Normandy. 2020 is the year for everyone to come out fighting and ready to do battle with adversaries terrestrial, celestial, and internal. That last one is the hardest force of all and the one that's going to take the most focus. But those who keep their eyes and ears open know that - no matter what apocalyptic forces are knocking at the door - the battles we do with ourselves are hard-fought and make us stronger, make us able to fight anything thrown at us. Don't fear the beginning of a new era. Turn your face into the celestial winds and sail on.