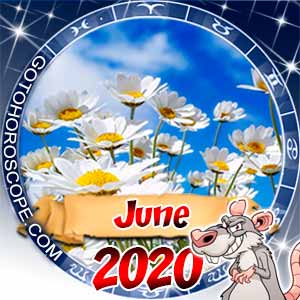 June won’t be a cakewalk for anyone, but the good news is we’re all in this together! With two powerful eclipses and multiple retrogrades on the way, June brings some pivotal shifts that move us into the energy of restructuring the norm.

The big headline event for June, other than the dual eclipses and another Mercury retrograde, is Jupiter’s conjunction with Pluto on the 30th June. All month, the planets are gearing up for the meeting of Jupiter and Pluto in Capricorn. This tectonic shift is like a full-on therapy session from the Universe, revealing an obvious but “larger-than-life” truth about our achievements and success.

Before we find this truth at the end of the month, we’ll need to spend a few weeks answering some hard questions about why we believe what we believe. The answers won’t come without pain; Jupiter’s quintile to Chiron in Aries on the 1st ensures that. As June begins, the planets give us a chance to come to terms with the reality of our own pain and admit our insecurities. This is a chance to reorient our beliefs and own our humanity so we can look forward to the promise of tomorrow being better than today.

Letting go of tradition and the status quo can be difficult at first, especially as Pallas enters Capricorn on the 2nd.

On June 5th, a Full Moon lunar eclipse culminates in Sagittarius with the power to bring out our shadow sides. Even receiving love is more difficult now as the eclipse’s square to Mars brings rash actions and emotional conflict. Have courage in the face of perceived threats, and don’t let laziness or impulsivity lead you into an avoidable argument.

The key to healing this month lies in the realization that the healing process never truly ends for anyone. As humans, we are all battered and broken in some way – this is precisely what makes us human.

Who could you become if you finally embraced your flaws and focused on self-care? That is the question June 10th asks as Uranus in Taurus semi-sextiles Chiron in Cancer.

June 18th brings another infamous Mercury retrograde. Although Mercury enjoys traveling through the Cancer, a sign of home and heritage, when the planet of communication is retrograde it acts as a switch to shake up everything it stands for. Be prepared to encounter issues surrounding short-distance travel, communication with family members, and hoarding for the next few weeks.

This focus on family and emotions is heightened even more when the Sun enters Moon-ruled Cancer on the 20th. At this time, we are called to honor our origins, our ancestors, and the foundations of our being. Our journey into our memory opens a gateway into the past and all the wounds it holds. This translates into a sensitive and precious new definition of what it means to “come home” to ourselves.

And if you thought things couldn’t get any waterier, you’re in for a surprise on the 21st. Just after the Sun’s ingress into Cancer, we experience an emotional New Moon solar eclipse in the sign of the crab.

This eclipse lines up exactly with the Summer Solstice – the longest day of the year when the Sun comes to a standstill at its zenith in the sky. Now is your opportunity to overcome a challenging ending and access the new Karma and new beginning this eclipse brings.

As the solar eclipse calls for us to stand firm in ourselves, tensions arise between the Self and authority. Expect confrontation with a boss, father figure, or leader who doesn’t take kindly to a decision you make.

By the time Neptune stations retrograde on the 23rd, we may be inspired to escape into delusions and false realities we’ve created for ourselves. As our beliefs are challenged with disappointment, it’s all too easy to retreat into denial. Try your best not to escape into the fog as transit promises the destruction of our fantasy world. Right now, we need to bridge our immaterial visions and nonexistent boundaries with material manifestation and structured spirituality.

Luckily, June ends with an intensely focused conjunction between Jupiter and Pluto in Capricorn. On the 30th, we receive a gifted ability to pry beneath the surface and renew our devotion to things society has told us are impossible. Any clouded judgement is replaced by the truth about where we stand in the hierarchy of power and success.

Moral and ethical intentions are paramount now. Acting in a ruthless or obsessive manner will attract the chaotic destruction of Pluto in the form of superiors. If you instead direct your focus to creation and truth, this planetary conjunction promises a long-lasting phase of prosperity in business, wealth, and power. Detach from external validation and expectations; go within to discover your purpose and what you truly desire to achieve.

The element of water is definitely a star player this month, and waves of emotions could threaten your idea of safety. But the changes June brings offers us all transformative changes and closures in our healing journey.