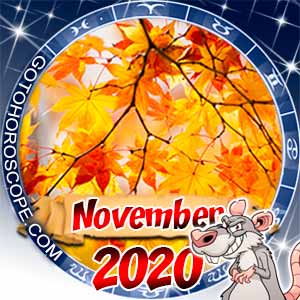 After a Full Moon on Halloween, it seems impossible that the energy of November could top last month’s, but we’re all due for an exciting change of pace now. Retrogrades have rocked our sense of normal for weeks now, but November really is a whole new ball game.

Theoretically, the wheels of the Universe should be turning a little better once Mercury stations direct in Libra on the 3rd. Finally, the dreaded Mercury Retrograde is over (even though we'll still have to deal with the ~2 weeks of "shadow" zone energy), and we can enjoy the diplomacy of this Libra transit. As we communicate over the next week, we're inclined to do so politely, weighing all sides of the argument before we lend our opinion. However, this can bring the temptation to skim the surface of the facts and gloss over the cold hard truth just to keep the peace.

The rarely mentioned asteroid Ceres enters Pisces on the 9th to evolve our experience with nurturing, the Earth, and overall health. While she represents physical cycles such as seasons, she also paints our understanding of motherhood and unconditional love – named after the Greek Demeter who lost her daughter Persephone to the underworld.

To really take advantage of this collective vibration, take care to nurture your dreams whether that means adjusting your sleeping habits or starting a dream journal.

On the 10th, Mercury enters Scorpio to take our thoughts and communications down an intense path past the gate of death and into all things taboo or mysterious. We seek profound realizations and deep, focused conversations over the next three weeks; anything superficial just won't do. All this searching for motivations and undercover info can leave us feeling paranoid and obsessive, so watch out for harboring a one-track mind.

We won't see another Jupiter-Pluto conjunction in Capricorn like the one on the 12th again in our lifetime. This aspect occurred twice already this year (once in April and again in June), but this is an intense send-off that packages up all the insight we've gained over this cycle. Indeed, when the planet of expansion connects with the planet of transformation in the sign of responsibility, luck and fortune empower any mature actions. Right now there are distinct shifts in power with new systems and authorities splitting the ground beneath our feet, but this is to root us in our own dedicated sense of status and power.

Mars direct in Aries is a chance to reclaim our energy and to go after all that we really want. There is a shadow side to this energy though, as even the planet of action can be impulsive, self-centered, and impatient. We should all look forward to the future right now with courage on our chests.

A real chance to start fresh welcomes us on the 15th as the New Moon in Scorpio cracks open the sky. Inspiration and breakthroughs could be in the cards for most of us, but we can facilitate this energy by pondering the true meaning of life and the motivations behind our own actions as well as the motivations of others.

It’s a good time for us to engage in reconnecting with those we haven’t visited with in too long. Everyone seems a bit warmer and kinder-hearted for the most part, so it’s a great time to share ideas or debut presentations. Anything that involves helping someone on a personal level or sharing in front of a large audience should flourish right now.

In fact, you could even go so far as to say that any passionate action taken right now will see its effects magnified. Especially after the 21st with Venus in Scorpio, the Universe wants us to plunge deep.

The Sun enters Sagittarius on the same day, making the landscape as broad as Venus in Scorpio makes it deep. We’re searching for so many things so much larger than ourselves, but that also means we’re more prone to having unrealistic expectations. As usual, we can avoid some trouble by setting our hearts not on the destination but on the journey and where we are right now. Faith and beliefs are at the forefront of the playing field, but they don’t always do well with other people’s.

The spiritual side of things is even more pronounced after the 28th thanks to Neptune stationing direct in its home sign Pisces. It seems we are escaping into our dreams and fantasies, but we need to keep at least one foot in reality.

November rolls to a close with a full moon lunar eclipse in Gemini that sheds a different kind of light on our path. While it may be mystifying, we’re certainly not going into December without a few questions.