Overview of 2023 Astrological events that are vital for the fate of the Zodiac sign Aries during the course of the Black Water Rabbit Year. 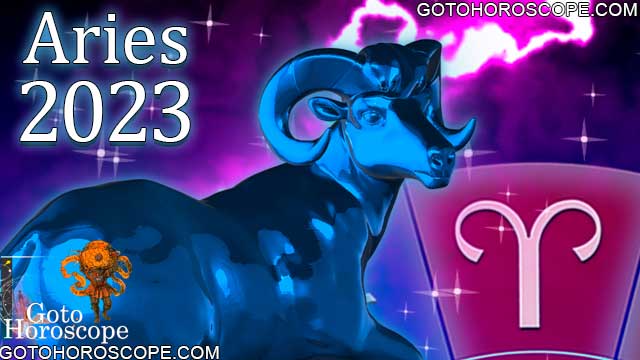 2023 is a big year. Astrologically we have significant changes happening for everyone. For Aries, more than the other signs, it's a change in pace.

Aries is arguably the fastest and most driven of the fire signs. With Mars, the planet of action and drive being your ruler, we know that taking action and leading by example are almost always a priority. However, with this year's changes, you're likely to be invited (or challenged) to pay more attention to the spiritual side of your life. That includes your mental health and your trust in the unseeable forces that permeate your life. 2023 is the first year of a 2 year-long cycle that asks you to be more open to the unknown. Be ready to spend lots of time alone to meditate on the real meaning of life. This is especially true if you're around 28 to 29 years old.

Saturn is the primary culprit for such an introspective year, who's changing signs and entering your 12th house later towards the end of the first quarter. But before we get there, you still have some time to make adjustments and prepare for the changing tides. So let's see what the year has in store for you before Saturn makes the move of the year.

In January, at the year's inception, we're still sorting out some business with Mars and Mercury, who were retrograde at the end of last year. This Mars retrograde is likely to have intensified events regarding close friends or siblings. Perhaps you've had to deal with excessive competitiveness or feelings of insecurity. There's a chance that money issues might've been the cause of the animosity, but with the red planet beginning to move forward on January 11th, we're sure to see a resolution on those late-year problems. If you're met with resistance from the friends or siblings you had an argument with, it's best to take this early year opportunity to initiate peacemaking.

This transit might also have triggered work issues for those who are in the area of communication, such as social media, oration —especially for priests and motivators—podcasts and writing. With Mercury also moving forward on the 18th, those issues are also sure to be softened. In many ways, the year really starts after that date.

After sorting out these early-year annoyances, it's time to get to business to anticipate the Saturn sign change.

Saturn is the planet of restrictions, boundaries and difficulties. Though, these challenges are not just hard. They seek to teach us how to be more mature, responsible and self-sufficient. They're usually here to remind us that no one can help us succeed better ourselves.

The 7th of March is the official sign change that initiates a period of new evolutionary lessons. This shift highlights your 12th house. This is the house of loneliness, meditation, introspection and surrender. Astronomically, it corresponds with the first few hours of the day, when the Sun had just risen, but it's still obscured by trees, mountains and buildings. In which case, we can be cognizant that the next step that Aries needs to continue the maturation process is learning how to shine even when no one is there to see it.

The best way to work with these energies is to learn to be comfortable alone with your thoughts. Even those dark ones that make us feel anxious and incapable. You're to learn how to tame them by bringing in the heat that is inherent to your sign. You might even want to travel and explore the more wondrous side of loneliness. When we're by ourselves, free from the expectations of the external world, we can wipe the slate clean and paint a whole new picture, more synchronous to our desires.

Pluto also follows suits and moves to the following sign-in zodiacal sequence, making the planet of transformation a powerful presence in your friendship circle.

Very much like Saturn, Pluto is also about the big picture. Still, because it moves considerably slower, whenever it changes signs, it likes to foreshadow what's to come in the next 20 years by giving us a few months-long preview of what's to come. While that might seem too broad of a picture for us to pay attention to, these bite-sized transformative moments are in no way small.

This year Pluto will be in your 11th house from March 23rd to June 11th. The 11th house is the place of friends, hopes, opportunity and community. Because Pluto is arguably the most mutable or transformative of the planets, you can expect significant changes in your community or collective aspirations. Still, because the lord of the underworld is still not fully committed to transiting through those topics in your life, it will retrograde and go back to your 10th house of career in the latter half of the year. With that, you can expect changes that feel massive at first but don't quite reach the completion or maturation that you'd expect. Still, don't be fooled. As mentioned earlier, Pluto likes to play the long game, so these changes will be more substantial as the years progress. This transit is especially important for any Aries who has any planets in their 11th house, or who are 22, 34, 46 or 58. If you don't fit these criteria, the effects of the outer planet will be much more subtle.

With that said, it's not like Pluto will be inactive once it goes back into Aries' 10th house. As much as he's starting a new 20 year-long cycle involving your friends and community, he's still completing his mission of transforming your profession. With that in mind, the days after June 11th might have a more career or reputation-focused lens. Those debating on a job change or even starting their own business can be certain to feel an extra push to get that done.

2023 is a year of many changes, but since the planets responsible for those are primarily sluggish, you're better off expecting a slow burn kind of year. Be patient with yourself, and make sure to take plenty of time alone to fully digest the gradual yet heavy events of the year. Good luck, Aries.