Overview of 2023 Astrological events that are vital for the fate of the Zodiac sign Leo during the course of the Black Water Rabbit Year. 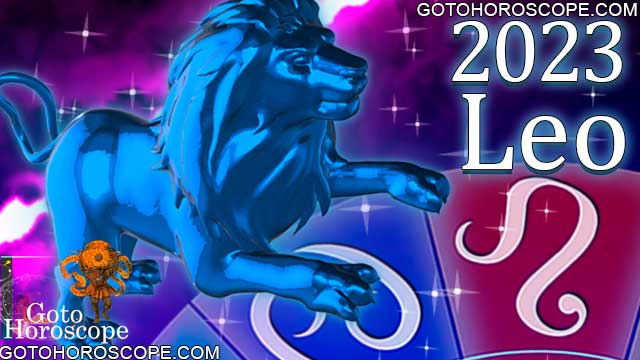 2023 feels new and fresh. After the last couple of years, we're all in need of a new life, and this year promises to deliver. For Leo, a lot of these changes require a little bit of effort. Still, as a fire sign, Leo is not one to shy away from a high-risk, high-reward situation. Two planets are responsible for such shifts: Saturn and Pluto. Saturn will be entering your house of collaboration, debt and lawsuits, whereas Pluto will briefly make an appearance in your 7th house of romance, partnership and intimate relationships. These two will be a must-watch if you want to be on top of the energies of the year.

Now, Pluto and Saturn are both about the big picture, with Saturn staying in your 8th house for almost 3 years and Pluto —more strikingly, so— for 20. So, before we get to that, let's first take a look at how the year starts. Neither of these astrological giants will be making big moves until the second quarter, so the first few months of 2023 are an important preparation period.

We start the year still figuring out some of the unfinished business from 2022. Both Mercury and Mars, who started retrograding later in the previous year, continue to do so, but not for very long.

For Leos, this double retrograde likely showed up in difficulties with collaboration. There's a chance that your vision for certain projects and aspirations wasn't fully aligning with your community or peers. That could've made your work-life a lot harder to manage. It could even be that a lot of that stress manifested some health issues such as stiffness of the body and overall psychological tension. The good news is that all of that comes to a resolution quite early in January, with Mars beginning to move forward again on the 11th and Mercury on the 18th.

It would be wise to take advantage of these two planets moving forward to stand your ground and make demands on how you want your collaborators to behave moving forward. Like I mentioned earlier, with two outer planets changing signs, you don't want to carry any old tension with you moving forward.

That's a nice segue into the big astrological events of the year, beginning with Saturn. The ringed planet of limitations, hard work and boundaries will be changing signs and entering your 8th house on March 7th. This ingress initiates a shift in difficulties. Saturn had been transiting through your 7th house of partnerships for the last 3 years or so, making love matters quite cold and dry. For the partnered Leos that could've manifested a level of distance from your partners, and the single Leos were just not having an easy time finding love at all. The good news is that now that Saturn is long gone from that area of your life (and not returning for another 28-30 years), there's a lot of room for improvement.

Still, the 8th house is no joke. This is where we find the difficult situations in life that must be dealt with. Things like paying bills, lawsuits and inheritances all belong to this place. Astronomically, it corresponds to the last few hours of sunlight in the day, right before sunset. Interpreting it symbolically shows us the time where we're getting ready to rest, but we're not quite there yet.

Saturn in the 8th house is notorious for dealings with the law in all shapes and forms. Even when we're dealing with it for our own benefit, like applying for a grant or loan, the layers of bureaucracy are far less than pleasant. Since this is only the beginning of this 2.5-year-long transit of Saturn in that house, be ready for a lot of back and forth. Since Saturn is the planet of slowness, you really don't want to rush things here. Make sure to do everything by the book. Whether you're buying a house, joining financial responsibility with a partner or even just collaborating on a project with an elder in your field, slow is the way to go. It's also important to remember that Saturn is the planet of difficulty, so unless these processes are urgent and unavoidable, it would be wise to avoid dealings with paperwork and law for the next little while.

We talked about Saturn leaving your 7th house, but that place won't stay empty for very long. Shortly after Saturn ingresses into Leo's 8th house, from March 23rd to June 11th, Pluto will be making a brief appearance in your 7th. Like mentioned earlier, Pluto transits are 20 years long on average, so this arrival is merely a preview of what's to come in a much bigger picture.

Pluto's natural tendency is to forcibly transmute certain aspects of a life sphere that need to "die." As rough as this planet can be on its delivery of such transformation, they're usually very much needed. You can think of this transit as Pluto finishing up Saturn's job. Since the ringed planet had been in this house for the last 3 years, now that he's gone, Pluto is coming in to look at the nooks and crannies of relational dissatisfaction that Saturn missed out on. You can think of this short preview of Pluto in your 7th house as a way demanding the ideal relationships you deserve. Whether they're business partnerships or something a little more romantic. There's no room for selfishness here. The only choice is to learn to collaborate, or else Pluto will make it obvious that maybe certain things are just not meant to be. So as long as you're willing to put in the work, the results are bound to be significant and long-lasting.

2023 is a change for the better. But if all the Leos were expecting it to be easy, I hate to break it to you: This year is about hard work. The more willing you are to show up for the job, the better the results will be, so don't be afraid to be assertive, take risks (as long as they don't involve the law) and be bold. Saturn and Pluto will both appreciate the display of authority, and in turn, will provide you with the power you need to thrive. Good luck, Leo.