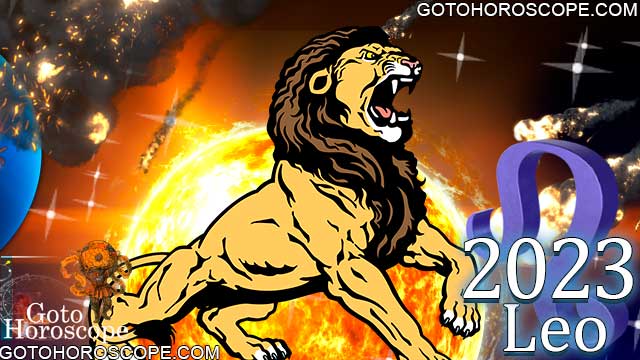 Without a doubt, 2023 is quite a big year for Leo natives. With Saturn, the planet of difficulty and limitations moving out of your angles (that is, the ascendant and midheaven axis), the looming presence of the ringed planet will go from hard to miss to almost mysteriously absent in most cases.

There's a lot more room for moving forward and making some big moves with fewer limitations, and "big" is just the appropriate keyword to use to describe this year.

This is primarily because you'll have Jupiter entering your 10th house of career towards the halfway mark of the year. With the shift officially happening on the 16th of May, there's a lot to look forward to as Jupiter is notoriously the planet of abundance. If you were born during the day, this transit hardly comes with any worries, but for the nocturnal births, there are some things you might want to keep in mind.

Jupiter's mission in your 10th house is to establish a solid foundation throughout the 12 months of the transit. It can present you with teachers and visionaries who appear almost as through divine chance. If you're willing to be humble and listen to the teachings, progress is virtually guaranteed. Though, like mentioned earlier, this might be a more difficult task for those born at night, as you might be more prone to display the braggadocious and overly material traits that also belong to Jupiter.

The Venus retrograde of the year also plays an essential role in your career's fate this year as it happens in your own sign, and Venus is also the planet responsible for taking care of your job.

This transit happens from the 22nd of July and the 3rd of September.

The main focus of this transit is to get you to revise both the standards you have for yourself and how you present yourself to the world. Especially since Venus and Jupiter will square one another through the length of the transit (and even a bit longer than that), the tension will be getting rid of the need to be a star or a hero in your field.

Though the year comes packed with opportunities for both glory and profit, learning how to bear the weight of the responsibility that comes with both of these blessings is pivotal. If you want to get ready for the transit before it actually manifests, the thing to do is work on is trying to find alternate ways to define who you are other than by what you do. Even more importantly, this can also be a lesson on doing what is right even if you may not get the credit or be recognized for your actions.

Pay extra attention to the eclipse happening on the 19th of May, as this gives you much of the initiatory insights you'll need to carry with you for the rest of the year. Since this is a solar eclipse, you can expect a loss related to work (especially if you are 21, 33, 45 or 57). Though it may not feel comfortable, that's the loss that you'll want to do plenty of thinking on, as it raises the red flags to avoid once the Venus retrograde comes around.

2023 is a big year with big lessons. In many ways, the significant transits of the year have many of Leo's interests at a focus. Though the general vibe is that these transits are primarily constructive, it still doesn't mean that they won't come with some other major life lessons. Now that Saturn's influence is out of the picture, the difficulties around this year are much more internal and introspective, indicating that this is the year for you to reinvent yourself. That's quite a big task, but I'm sure you're more than ready for it. Good luck, Leo!