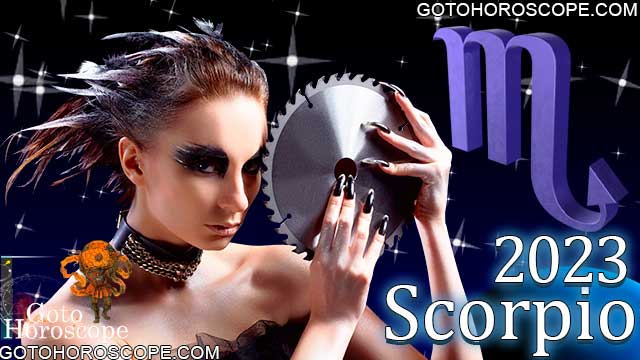 If you've spent any time on the astrology side of social media, you've probably been flooded with the many memes portraying Scorpio in a rather sensual light. While there's definitely a certain level of truth to those, the reality is always a little bit more complicated than a comic strip that took someone 2 seconds to make. Truth be told, Scorpio is simply about intensity.

With that in mind, "intensity" is actually a very good word to describe how 2023 will feel when it comes to your love life.

Whenever we're forecasting Scorpio's love future, we have to turn to Venus since the lady planet is the one responsible for your 7th house of marriage, love and partnership. This year, this planet will be quite busy as she enters her semi-annual retrograde period in one of the most important houses in your chart, the 10th house.

This transit can be quite the opportunity to bring love to fruition, but not all Scorpios get to experience it in the same way.

If you were born before sunset, Venus could sometimes be more trouble than it's helpful, and this can be remarkably noted when she goes retrograde. Not only because retrogrades sometimes can signify reversals, but also because that means that Venus will transit through that same house all the way from early June to early October.

For those born in the morning and who are either 18, 30, 42 or 54, this can trigger a particular fear of loss. You might end up spending a lot of time thinking of what could've been with a special someone, which could then affect your productivity at work. Here it's important to note that whenever Venus is retrograde, it also means that she's the closest she can be to earth. This intensifies our desires to a point where it can be uncomfortable like you can't get that someone out of your mind.

If you are in a relationship, this is probably just a way of the universe making you think of the good old days while elucidating the direction you might want to take your relationship next.

On the other hand, for those who were born at night, Venus is much more productive. This retrograde could even make a past romance possible, and since this is happening in your 10th house, it might even be that an old workplace romance resurfaces. However, it's very likely that you won't be coworkers anymore, making the romance actually possible.

The other alternative for those who are already happily coupled is that old obstacles you've had in your way from either getting married, having children or moving in together will be much easier to work around. That doesn't mean it won't be work, but it will certainly feel a whole lot less impossible than it did in the past.

One thing that's also important to note is that Jupiter will also enter your 7th house of relationships this year. This planet is known to bring good fortune wherever it transits through, so whether you're born during the day or night, there's certainly room for some positive developments. Especially if you are 18, 30, 42 or 54. With the 30-year mark is the most important since that can also be an age where you're especially prone to getting pregnant since Jupiter is associated with children and fertility, and he's also the planet responsible for your 5th house of offspring. If you're not planning on getting pregnant, take this as a sign that you need to be extra careful since fertility (whether literal or creative) is assuredly one of the major themes for Scorpio this year.

With that said, 2023 has a lot of room for positive development. Romantic matters and anything related to it is likely to be one of the most prominent themes throughout the year—whether you like it or not. So get ready for some smooching, Scorpio. It's time to put those memes to the test and see if you really are the sexiest sign in the zodiac.