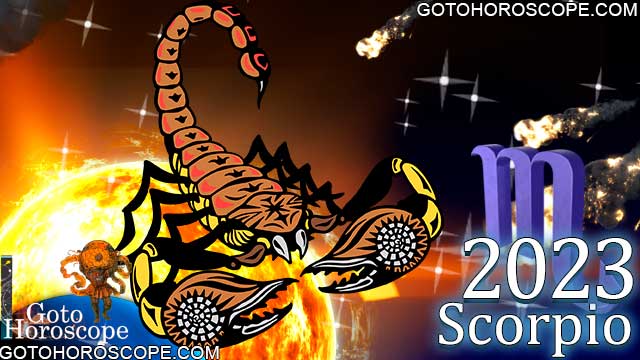 Scorpio is surely in for quite the ride in 2023. There's a lot to look forward to, especially since, for the past few years, your sign, along with all of the other fixed signs, has been getting the shorter end of the stick when it comes to ease and relaxation. Especially when it comes to career, because Saturn, the planet of difficulties and restrictions, has been opposing your 10th place of career, you might've felt like you had your foundations crumblings apart. In turn, you had to start from zero all over again.

The good news is that not only are these difficult transits here to show you the gaps that need to be filled in your plans toward success, but in 2023 the challenging part will be long over. This year is the year for you to implement everything you've learned so far.

Because your 10th house (the place of career) is ruled by the Sun, we always have to pay attention to the eclipse cycles when trying to see what the cosmos has in store for Scorpio. This year is quite a big deal for your career especially if you are 21, 33, 45, 57 or 69.

Because the eclipses will be happening in your 1st and 7th house, you can expect to be frequently working in group efforts. This is even further emphasized by the Venus retrograde of the year happening in your 10th house since she herself is the planet of partnerships and collaborations.

Though since this is also a Venus retrograde, you'll be asked to be more on the supporting end of these endeavours. As much as you may try to run the show and do things your way, you'll have to learn a thing or two about being backstage.

Scorpio's 10th house is all about leadership and taking charge, and a sign as observant as you have all it takes to be a good leader. So the paradox of the year will be having to lead while being an employee. This can be manifested as a position in team leading while still having to report to an egotistic superior. The annoying thing about them is that they will have the experience and resources to back up their overt poise despite their self-centredness. So even if you might not necessarily be inclined towards being more on the submissive side of the business, if you make a little effort, it will go a long way.

The height of all that action takes place in August when the Sun enters your 10th house, and both of the benefic planets (Venus and Jupiter) are providing support simultaneously. Be sure to play extra nice at around that time since you'll be more likely to be recognized for your efforts. Even if you run the risk of being seen as a bit of a sycophant, the rewards will be so tangible that you won't have the time to give much attention to any gossip going around the workplace. Besides, no one knows how to clear out a rumour better than Scorpio.

With all that out of the way, 2023 really looks like it's the year for Scorpio, along with the other fixed signs, to get out of a long rut. Over the last few years, much has happened to hamper your progress, and this is only the first step toward something greater. Though if you need advice, be careful not to overwork yourself. Even if being in the subordinate role might be rewarding this year, you don't want to overdo it to the point that you completely lose sight of your own goals and aspirations.

Even if you might not have that much time to work on your own endeavours this year, make sure to keep them in your mind's eye because all this work should help feed your future, not make it be someone else's. Take this opportunity to prosper, Scorpio. There's much to look forward to this year!