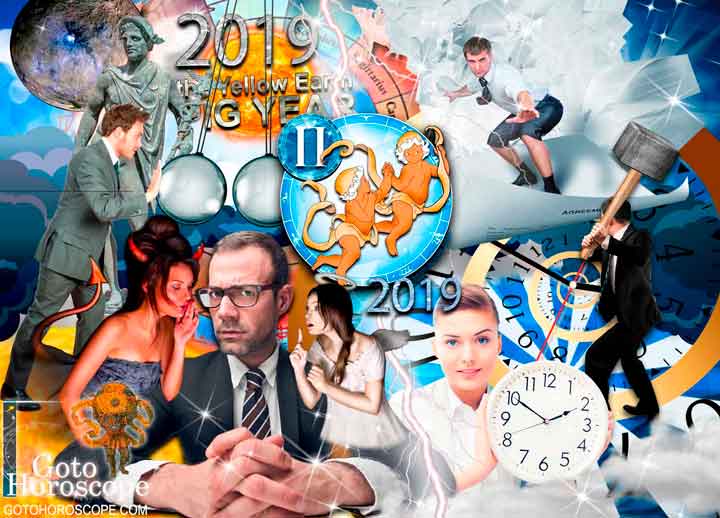 This means that in certain stages, the representatives of your sign of the Zodiac will almost physically feel the support of their heavenly patrons, but an opportunity does not depend on this, but rather on their own achievements. That's right - for Gemini 2019 can be described as a time to increase wages and skills. In other words, representatives of your Zodiacal sign will start from previous achievements and climb even higher.

For those Gemini who does not have their own business, the first months of 2019 may seem like an unusual period. Not everything will go according to plan, but all goals will be achieved, and in a shorter time than planned. This will allow for some breathing space, which can be used for a thorough analysis of the current situation. The stars recommend Gemini act quickly, not delving into self-criticism. With such, nearly all Gemini will find a way to achieve their goals. Probably, management itself will give the Gemini an opportunity to prove itself. It is necessary to do this without fail. In spring and autumn it will be best to reduce activity, because the return at these times will not be proportional to the efforts made. Such intuitive flexibility will help Gemini solve problems quickly. As for many other signs, the original way is preferable to you.

If we are talking about Gemini who has their own business, opponents (in any sense and context) should be closely monitored in 2019. Not because there are any difficulties, but because they will have something to learn. And often they themselves will not understand how powerful such learning can be in your own hands. Thanks to the successful location of Ceres, the period of 2019 for representatives of the sign of the Zodiac Twins will be fortunate without explanation (thought is possible). This will save time, especially since in the end, close ones will understand what the Gemini acted on and what they intended. This is a period when you need to keep secrets, especially regarding the most sincere and powerful desires. The most ambitious projects are best implemented in the summer season, when it will be quieter and no one will interfere. It is very important not to overestimate the nearest subordinates; they are unlikely to seriously screw up. With the personal support (or direct patronage) of Gemini, they will be able to achieve much greater successes and the result will be even greater.

In general, in 2019, from the point of view of career achievements, Gemini will not require a significant amount of resources, but it will be necessary to work hard, thinking logically and carefully. The more difficult and intricate combinations will lead Gemini to victory, and the more epic this victory will be, returning great profits to the Twins.

2019 Horoscope for Gemini by spheres

2019 Horoscope for the Zodiac sign Gemini for the PIG year

Love and Romance 2019 Horoscope for the Zodiac sign Gemini

Money and Finances 2019 Horoscope for the Zodiac sign Gemini

Health and Wellness 2019 Horoscope for the Zodiac sign Gemini